Le Butcherretes – Cry Is For The Flies

Back in 2012 I was merrily heading up to London to see one of my favourite bands of all time, The Mars Volta. They were being supported by a little known Mexican garage band, Le Butcherretes. The gig was mind-blowing. The energy and wild screams emanating from the mouth of frontwoman Teri Gender Bender (aka Teresa Suarez) woke a crowd up who were standing idly by checking their phones waiting for The Mars Volta to turn up. Drummer Lia Braswell, provided a reassuring rhythm and energy behind the kit, matching TGB step for step. I bought the debut album, Sin Sin Sin, at the show and have been astounded at how slowly it has taken to band to get the recognition and praise it deserves.

Cry is for the Flies is the ‘difficult second album’ after standout debut Sin Sin Sin. It’s been a long time coming, mainly because of the blossoming artistic collaboration between TGB and The Mars Volta/Bosian Rainbows supremo Omar Rodriguez-Lopez, who’s produced the album and plays bass on it. It seems that the time away from the band has been well spent as Cry for the Flies bustles with an exuberant energy. 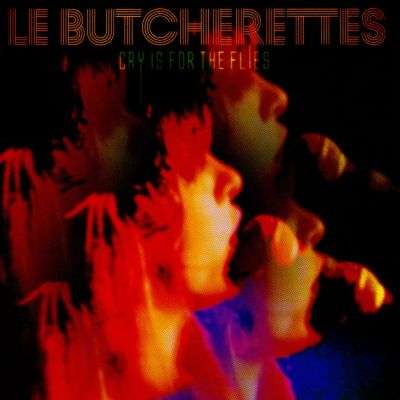 The first track, Burn the Scab, sets the tone for the entire album; dark and melodic with heavy guitar sounds and omnipresent crashing cymbals. The standout track is undoubtedly, the gloomy, introspective ‘My Child’. This track shows a maturing of the bands’ musical output. ‘Your Weakness Gives Me Life’ is a lively punk rock tune interspersed with well placed, subtle horns. Black Flag head honcho and ‘comedian’ Henry Rollins appears mid album for some spoken word before the band launches into the catchy ‘The Gold Chair Ate the Fireman’. Overall the heavy guitar riffs, crashing drums and complex emotionally driven lyrics make this a cracking sophomore effort from Le Butcherretes.

There is still a bit of work to be done. The guitar riffs sound quite similar on some of the tracks and TGB still has a tendency to go a bit overboard with her undoubtedly powerful vocal range. For the most part I’m just being curmudgeonly. On ‘Poet from Nowhere’ TGB wails ‘you probably never heard of me’, on the evidence of this it won’t be long before everybody knows Le Butcherretes.

Listen out for: Burn the Scab, Your Weakness Gives me Life and My Child