So here it is: Spencer Krug’s emergence from the darkness, unshaven, uncut, and uncoothed – he’s back. In saying that, I’m fully aware of Moonface’s Organ Music Not Vibraphone Like I’d Hoped EP from last year, but this is different, and it’s what Spencer Krug’s substantial songwriting belongs on: an album.

This project is close to his heart – it’s honest, commanding, and traumatic. When you listen to the last EP, you hear half a story and, now we get to hear how it gets up there in his head. There’s a lot of psychological regurgitation within this record; these abstract angles he takes on events from his own life are quite incredible – take the enigmatic Quickfire, I tried where he faults his actions, meticulously in sequences of events. These thought processes are mimicked in the lyrics and, without being severe, he destroys himself in a bi-polar guise.

“Heartbreaking Bravery exists, When you were next to the wild animals, I was the baby still on your tit, And now I want your sex, But I am not the fox, Standing over the kill, With blood-stained lips.” Whilst in the past it would have been fair to say that there were rarely repeats in his chorus’, this opening track implies the subtle shift we’ve seen in writing style on all his newer material; there’s almost an arrogance of simplicity whilst working with the metaphors, and it works perfectly. Whilst the language is still very potent, we can hear a bite and effortlessness in places – showcased no better than the layered Shitty City, which only has twenty-six different words in it (you’d expect that in one of his phrases, usually). I always find it fascinating and equally uncomfortable hearing people I hold so much respect for talk so bluntly about how shit they are at life, and Spencer reminds us (and himself) of this regularly on this album – there’s hope for us all. See the letter he reads out in the 7:39 Headed For The Door.

Speaking on collaborating with Siinai, Spencer said “I want to make it impossible to get stuck in a rut, wherein any one sound or image is expected by anyone from Moonface.” Finnish band Siinai obviously engaged him enough to warrant this combination w 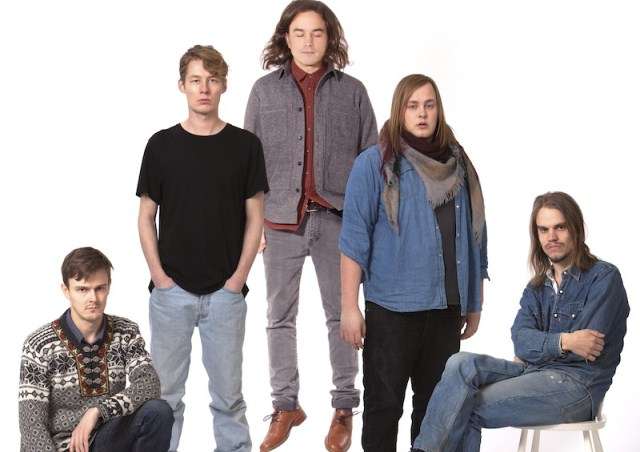 hen they toured with Wolf Parade in 2009, and whilst their input is unquestionable on the record, the types of musical cul-de-sac we are taken down are similar to what you’d usually expect from Sunset Rubdown. This being swirls of synth, purposeful passages of drum consciousness, subtle insistence of a vocal theme, and an onus on textural development – take I’m Not Your Pheonix yet as an example. The main difference comes in the instrumentation – instead of twee-vibraphone we have storms of organic layers. Their potent artistic contribution is summed up in the incredible Faraway Lightening. If you’d listened to the single Teary Eyes And Bloody Lips several months ago, like me, you’d have heard something not dissimilar to 2009’s Dragonslayer. When you look at it in a blunt way, it’s a poor single: not telling of the record, has a more convoluted lyrical style, and is not as developed as Sunset Rubdown’s later material. But when you hear it within the piece, it tells a succinct, sentimental tale, and that’s why it introduced the album. “When we float in the water, its not the absence of the other, but the absence of anyone else that will drown us in the end,” is just one breath of poignant nostalgia.

It’s hard to know what will happen to Spencer Krug in the future. He always seems to return to something similar to Shut Up Am I Dreaming; somewhere between his craziest and most sullen. In reality, this piece of art is an incredibly honest account of what he needs to write about; he wanted to sing about Courtesans, but ended up telling us ‘the bed looked like a butcher’s block, and you liked it better when I was on top, and I thought about nothing at all.’ So if you’re looking for something to go with a coffee and a copy of the beano, don’t flick on Heartbreaking Bravery – go for Expo 86, but if you want to hear him emote, say sorry, and tell the whole world to die, have a listen.