Kettering four-piece ‘Temples’ debut bring us an album that is heavy with a sense of longing, however it is a quality that is hard to pin down. Part of the reason for this can be attributed to the album being clouded by obtuse lyrics. 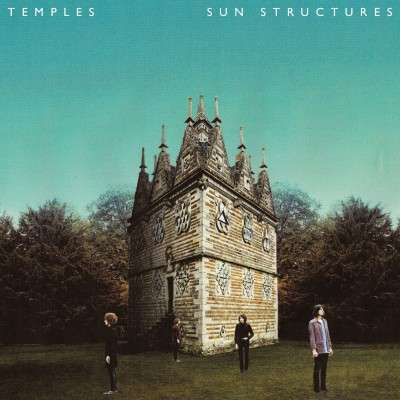 The record opens with a piece of nugget-inspired psychedelia in ‘Shelter Song’ which feels like a contemporary reimagining of The Beatles ‘Rain’. This first song establishes a formula that, as a listener, you will become accustomed to by the end of Sun Structures.

One fear is that ‘Temples’ will simply be seen as a heritage act for those who believe music has been on a downward trajectory since the breakup of the Beatles. In some instances, this album substantiates the idea that ‘Temples’ are just imitating what came before them, but there is still a great deal here to be excited about. ‘Mesmerise’ ,the latest single, and the aforementioned ‘Shelter Song’ are both instances in which there may be accusations leveled that their sound has merely been copy and pasted from classic 60’s artists; this is not true for the most part.

Throughout the album, Kettering’s newest sons have been able to tread the fine line between being informed by psychadelia and being in a thrall to it. This cannot be said of ‘Keep In The Dark’ that can only be described as sub-Small Faces. It has a vaudevillian quality and comes across like Syd Barret but without the paranoia.

Standout moments are delivered where ‘Temples’ are at their most modern; ‘The Golden Throne’ swaggers with a vengeance whilst ‘Sand Dance’ best hints at where the band will take their sound on that difficult second album. ‘Sun Structures’ closes with the mournful ‘Fragment’s light’ and in some ways it is regrettable that ‘Temples’ did not reveal more of this side.

“Sun Structures” is an album that thrives through its more experimental moments, but there is only so much you can demand from a debut. Only time will tell if Temples attract a broader fan-base, nonetheless there is the potential for a small but fervent following. As a whole this is a solid attempt and worth a listen, but regrettably it falls short of being a great album.

Keep In The Dark