Long time Supajam readers will be familiar with Sofi Tukker, as your scribe has spoken about them a lot during lockdown… but a recap. A double act, called Sofi and Tukker, they had a good pop career before covid hit, a career that I mostly saw and let pass me by. But when we suddenly couldn’t go out anymore Sofi and Tukker stepped up and did live daily mixes for hundreds of consecutive days, building a devoted following called the Freak Fam and I was absolutely one of them. They really were a fun, happy lifeline during those shut in times, and you’ve no idea how much I’d been hoping this, their first post lockdown album, would be worthy of a good review. 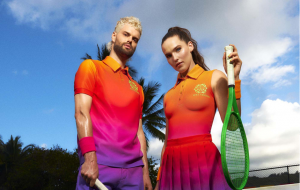 I pleased to report it absolutely slaps. What you’re getting is pure mainstream pop EDM by a pair who know their music history and know how to ride a vibe. There’s two main moods: the infectious, partying upbeat vibes of Summer in New York or Wet Tennis, and the more reflective but no less vivid and humane tones of Original Sin and Forgive Me. Sofi Tukker have always been known for their love of animals and there are natural, outside, awesome rainforest sensations throughout the whole LP.

There’s no better example of the fun, sly, sexy and smooth mood on Wet Tennis then the fact they’ve called it an awesome euphemism, and yes they have turned it into an acronym for ‘When Everyone Tries to Evolve, Nothing Negative Is Safe’ but I don’t think anyone actually buys into that, it’s all about the hot loving.

We do have a couple of minor criticisms, because this is a review after all not a piece of PR. Firstly, the album lacks a full on absolute banger which we know the pair have in them. Secondly, we respect not including lockdown classics like House Arrest as this is different and its own feeling, but let’s get those on the reissues bonus CD please. Thirdly, you could argue that all the songs are simple constructions, and we’re not going to argue if you do, but in the end it’s the enjoyment that matters and Sofi Tukker have again nailed the task.