If you’ve switched off from the constant news arc about Twitter, which was thrown at Elon Musk by a team that couldn’t got out fast enough and then experienced all the chaos a hyperactive man child can muster, then sorry, but you have to see this. Elon, a billionaire thanks to his family wealth starting him off nicely and many a government grant, purchased the loss making Twitter and made a few changes. One of these was introducing naked confusion into the verification system, meaning anyone could purchase a blue checkmark for any fake account and no one would notice in time.

So step forward the person who spent the most powerful $8 of the 2000s, because they decided to punish Eli Lilly, the company who charges $275 for an insulin shot which costs $10 to make and has increased the price 1200% since 1996. Basically, they’re bastards, and someone decided to fuck them in the most cost effective and efficient way possibly ever seen:

They registered a fake checkmark for Eli Lilly.

They tweeted insulin is now free. 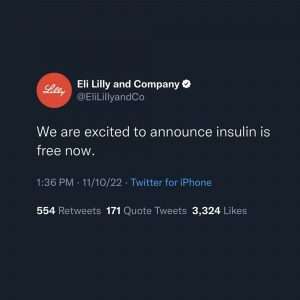 So many people believed it the official Eli Lilly share price tanked and cost the thieving, murderous scumbags billions. 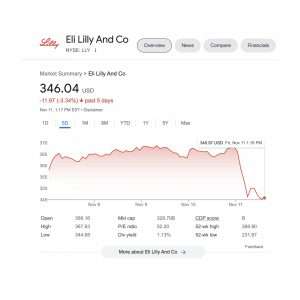 Eli Lilly had to apologise and say they’d never not charge for a life saving medication.

Then people got banned, probably.

The smallest amount ever spent on activism for the most powerful result surely. Makes gluing yourself to the M1 seem painful.

I think it’s fair to say Elon didn’t mean for this to happen, and advertisers are probably shitting themselves. And no, we won’t put this on our Twitter.

If this interests you, you might want to know the same was done to Lockheed Martin… and presumably others.