Ever since television was invented, science fiction has worked hard to warn us of potential horrors. We all know the thing: a horrible dystopian future where someone’s torture is broadcast live twenty-four hours a day to millions of ecstatic viewers. But what if I told you that’s already happened?

The thing is, it really has already happened. It’s the case of ‘Nasubi’ or Tomoaki Hamatsu as he was properly known and a show called A Life of Prizes. In Japan, in 1998, Hamatsu gathered with a group of other final candidates for a prize draw. All they knew was that the winner would be given a “show business related job,” and when he won he celebrated, thinking he’d gained a great prize. It was then that he was told the situation. Hamatsu was to be the only candidate on a reality cum game show. He was to be stripped of all clothes and possessions and locked in an empty flat. He’d only have light, heat and running water, and as many magazines as he needed.

That last sentence might seen the oddest of all, magazines? You see, the challenge was Hamatsu was only ever to be allowed what he could win from competitions in magazines. The only contact permitted with the outside world was sending off entries, and having prizes delivered. He had no food, he had no clothes, he had water and whatever he could win, in magazines, that famously fast and effective support medium. He was to be locked in until his prizes totalled a million yen in value, about eight thousand dollars back then. 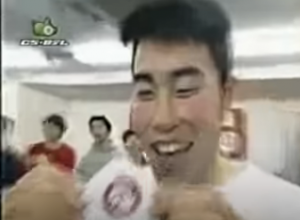 This was a weird nightmare situation, but it got worse. Hamatsu knew he was being recorded so his attempt could be edited together into a TV, but almost immediately the TV show was actually a twenty four hour live streamed channel which was watched by nearly seventeen million people. Someone had to be on twenty four hour watch to manually cover Hamatsu’s cock and balls with an eggplant graphic, giving him the personality replacing nickname Nasubi / eggplant.

Early on in this I called it torture. Is that a fair description? There’s a lot of psychological material on what happens when you keep people in total isolation. Within days, completely naked, devoid of human contact, Hamatsu started starving and losing weight. Luckily after a while he won some jellies. Then he won a bag of rice… but had to eat it raw until he created a jury rigged system involving jelly boxes. He mostly ate pet food, never won any clothing besides used women’s knickers so small they were useless, got a stuffed toy he began a conversation of mental collapse with, and a TV which he couldn’t connect to anything… in case he saw himself. 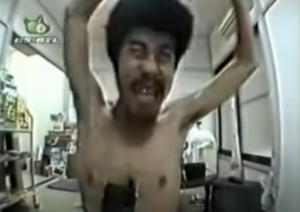 You might be wondering how the fuck this happened. Well, like most awful things, it didn’t start out of the blue. It was the latest iteration of a show called Susunu! Denpa Shonen, which took contestants (mostly out of work comedians) and put them in increasingly desperate challenges, such as the people who spent four months stuck on an island before they could build a raft and leave. That almost sounds Channel 4, but the season where a guy was locked in a room and only fed that day if he favourite baseball team won gives you an idea of how this was going. 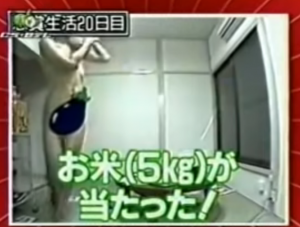 As this man went slowly insane millions cheered at home. In fact ‘Nasubi’ was so popular fans worked out the location of the apartment / cell and started gathering round it. Food delivery people turned up with meals he could smell but was never allowed to eat. Scared Hamatsu would hear, Producers blindfolded him and moved him to a different location, and then another. Video footage of these small periods with other people moving him shows a man delirious and unable to interact with others. Over time, Hamatsu began to have a few small personal wins: he turned a bike into a stationary bike for exercise, he got a chair and a desk, he managed to secure the victory of a Playstation albeit with one game he played for four days straight. We should mention that every so often the producers sent a doctor in to make sure he wasn’t likely to die anytime soon, but there was no consideration of his collapsed mental state. Eventually, after winning car tires which were of no practical help but costly enough to push him closer, and a final bag of rice to get over the victory total, the producers decided to completely betray him.

335 days had passed, Hamatsu had won, and he was given clothes, blindfolded and expected release. Instead, he was taken to South Korea, and given at a day at an amusement park. Bemused, but still thinking he’d won, he took part, had fun, ate well, before being taken to… another flat, where he was again stripped and the game changed into winning enough money to fly himself back to Japan. The video shows a man who looks about to just die. The producers asked him if he wanted to carry on, but it’s unclear what mental state he was in and he accepted what he was told. However, he endured, and now with almost a year of playing magazine competitions Hamatsu knew his stuff, and he soon won enough, but the victory conditions were changed again and again. Win business class. Win first class. Fifteen months into the experience, the producers gave in, and Hamatsu was flown back to Japan. He was put in a room, where he stripped off, expecting more ‘game’. Then the walls of the actually flat fell away and Hamatsu found himself naked in a full TV studio with an audience. He had finally been released. 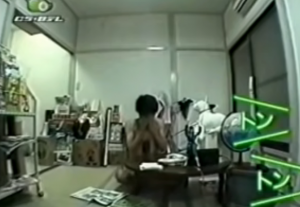 In the short term, Hamatsu had difficulty adjusting, with problems wearing clothes and talking. In the long term, Hamatsu won, as he embarked on a hugely successful career as a comedian, performer… and completer of the most ‘outdoor no walls’ challenge of them all, climbing Everest. When it came time in 2020 for people self isolate, he had enough warmth and faith in humanity to advice and give tips.

No one is sure whether the competitions were legitimate. Did he really not win any usable clothing in over a year? Or was he kept naked… The government ensured Susunu! Denpa Shonen did not last much longer. Was this torture? Was seventeen million people watching this a dystopian experience? Video footage exists. There’s something about watching a man trapped in complete isolation, physically humiliated, falling apart, with an end goal being altered to trap him there, that is both those things. A naked man eating dog food unable to leave his cramped cell? Yeah, that’s fucked up. And it happened. And people loved it.