*The Supajam Dive is a place to talk about something we love, but which hasn’t had the recognition it really should.

We have to begin with a concept. If I said to you ‘cult leader’, you’re really not going to take that as a positive attribute in someone, as 99% of cult leaders are exploitative nutters. But what if we said we know someone who’s every bit the opposite of that malevolence, but still keeps the hazy legend and wandering charisma. What if we’d heard the musical, kind, good Rasputin…

Okay, we better get some context here because you’re thinking what the fuck. So, please meet Jason Webley, a native of the United States and an accordion player of note. Jason has written some of the most evocative, emotional and imaginative songs we’ve ever heard, and he’s done it while consistently avoiding the pursuit of traditional fame in favour of building rafts and playing concerts floating down rivers. Yes indeed. A folk artist I would rank alongside Jeff Mangum and Tom Waits.

Let’s start at the beginning. In school Jason was in a punk band called Moral Minority (a name which carries the full Webley flavour), played electric guitar and used a sequencer. He was a normal teen bedroom musician. Then, at the University of Washington in 1996, he used an accordion while performing the work of Bertold Brecht and appears to have undergone a complete mystical transformation. He became the accordion, the accordion became him. By 1998 he’d left a job and started busking and recording in his kitchen. He released albums on Springman Records, but it’s not the recordings which made his name.

Jason toured, often just him and an accordion, playing whatever gig or festival he could, working with whatever musicians he could find, and some nights as he got the crowd loudly singing along he would lead the audience out of the theatre and to some spot he found in town and keep the vibes going. A happy, kind, generous Pied Piper of Hamlin, with long hair and a long beard and a love of the eccentric, an avoidance of the modern late stage capitalist collectermania: he has trouble with webcasts. In 2000 he began a period in which he’d stage a death every Halloween and a rebirth in the spring.

Other projects have included pretending to be a conjoined twin with Amanda Palmer, driving a car shaped like a fibreglass tomato, ‘Monsters of Accordion’ and albums heavily influenced by local history. The first of these, ‘Margaret’, was a crowd funded collaboration all about the life of Margaret Rucker, after Webley was passed her scrapbook found in a dumpster. Yep, really. Another was a second crowdfunded effort, all about the local Everett Massacre and it’s centenary.

So, enough of the preamble, let’s get into some songs. I realise I’ve been a little lax on genre here, and it’s a mixture of folk music, expressionism and pure creative genius. A chilled Waits. For us Jason isn’t just another acoustic bearded guy, he’s something with a genuine connection to a greater universe who can soothe us while engaging with our morbidity. With five solo albums as well as a live album and the three collaborative efforts there’s plenty to choose from. (Jason is on bandcamp if you want to buy.) 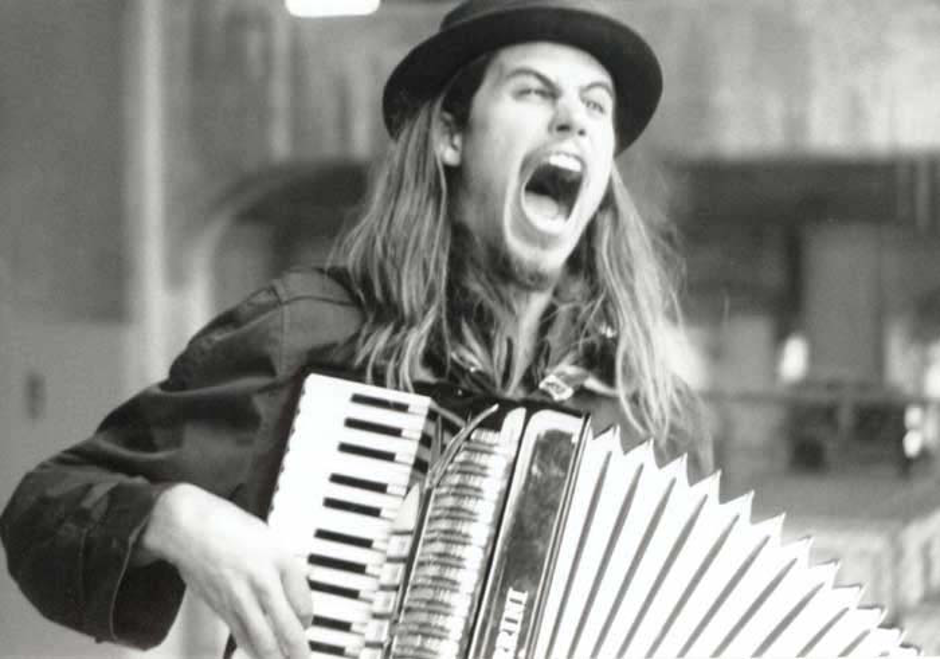 Icarus sees Jason merge the Greek myth with modern ennui, turning the failure of plunging from the sky into a gloriously different way of giving into where life is taking you. The collection of instruments are typical Webley, as are the many changes of tempo and force.

Dance While The Sky Crashes Down is both a song and a motto by which you can live your life. I loved it before Covid, but during the last two years it’s been a genuine comfort. The subject matter is frequently morbid, like a lot of Jason’s work, but the hope and peace is stronger.

I Made A Promise to the Moon might be Jason’s most famous song, as he performed it for the Welcome to Night Vale podcast and subsequent tour. Sadly this did not lead Jason to becoming hugely famous but, let’s be honest, Jason doesn’t seem to want that, and it’s absolutely fine.

Against the Night contains our favourite Webley lyrics, and some of our favourite lyrics of all time, starting with “hold on to these words, I like to think that they may offer some protection…” You really do feel that this shamanic troubadour would know words than can hold any darkness, figurative or literal, at bay.

Finally, Last Song, the set closer in which Jason asks us to consider that, while all looks bleak, in reality we might be coming to a new age. At Jason’s core is a gentle hope, and what more do we need?