What’s Next for the British Asian Comedy? by Hassaan Mohammad

British Asian comedy provides an outlet for comedians/actors from a South Asian background to express experiences that are common within British South Asian communities through a comedic lens. The shows in question tend to touch on South Asian cultural norms and family life as well as racism and the difficulties of fitting into British life.

The approach has changed over time. Much of the earlier shows were full of stereotypical South Asians as the butt of the joke. However, British Asian comedy came into its own with the BBC’s all-Asian sketch show, Goodness Gracious Me (1998). It followed British Asian culture and the difficulties of integrating into modern British life through a range of sketches. The show used the sarcasm of British humour and applied an Asian twist, subsequently creating a distinct British Asian comedy.

Citizen Khan follows a British Pakistani family’s life in Birmingham centred on Mr Khan, a self-appointed community leader. It managed to appeal to a wide multicultural audience and was notable for its portrayal of a Muslim family, although divided opinion on whether its humour is a mockery of followers of Islam and stereotyping British Pakistanis.

Adil Ray has maintained that Mr Khan is a comic character who is intended for families of any ethnic background to relate to, as with other British family sitcoms. 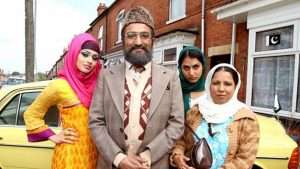 A more recent example is BBC Three’s Man Like Mobeen (2017), starring Guz Khan. The series follows the life of Mobeen, an ex-drug dealer. The drama highlights Mobeen’s struggles of raising his younger sister in the absence of parents, as well as living a good life as a Muslim. The show also addresses serious issues such as knife crime and faith-based hate groups.

While it has been a slow process, British Asian comedy shows have cemented their place in mainstream British television.

Man Like Mobeen is poised to return for a fourth series in 2023. The British Asian Network (a radio station in the UK) have hosted comedy nights which have been available to view via the BBC iPlayer. Stand-up comedians such as Romesh Ranganathan, Sindhu Vee, Tez Ilyas and Nish Kumar have seen their profile increase over the last few years.

Channel 4 are due to air the second series of the comedy “We Are Lady Parts” which follows a British punk band consisting entirely of Muslim women.

What British television is lacking is another mainstream Asian comedy on a main channel. There’s the matter of fragmentation when it comes to platforms but while sketch shows as a medium appear to be in a rut, I feel a mass-appeal British Asian sitcom is severely lacking. A Citizen Khan for an even wider audience.

The line when it comes to comedy has thinned massively, not to mention a more unpleasant atmosphere; to the point that British Asians joking about their own experiences as British Asians is, unfortunately, likely to be viewed as controversial.

There’s nothing I would love more than a British Asian comedy becoming the most watched show on British television. I am of the belief that there’s ideas that are just bursting to come to life.