Netflix? Yeah, here’s the thing. In Maverick, Kosinski produced a massive blockbuster that mixed nostalgia with the present. In ‘Spiderhead’, Kosinski adapts a short story for a minor sci-fi b-movie that Netflix sneaked into the rotation. Here’s the other thing: people are very confused.

It what can only be described as a sad omen for humanity, if you search Spiderhead on Google, as many people are doing to work out some nuances in the plot, the first result is ‘Is Spiderhead Real?’ Well Jeez I hope not, as Spiderhead features Miles Teller as a convicted drunk driver who’s agreed to take part in chemical tests to produce better medicines for the world, and just about every part of that sentence is subject to twists later in the movie.

This is a no spoiler review, so we’ll just expand the summary a bit more: Chris Hemsworth plays against type to keep his shirt on as he plays the lead scientist developing the meds, Teller and a small cast receive them, they’re all in a special isolated laboratory called Spiderhead, and there’s a few twists and turns before the end. The movie is adapted from a critically acclaimed short story called Escape from Spiderhead, so you pretty much know where this is going. 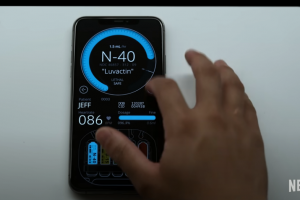 So, what do we have. You get the feeling this movie combines the usual Netflix traits (small cast, small locations) with the demands of coming out of Covid (small cast apart, small locations), and there is none of the CGI that Kosinski made his name using. Instead, it’s a mostly talky, very limited in scope film, and I’m fairly sure people won’t like many if any of the characters. I don’t find this a problem, I rarely like characters, but some people do. But don’t write Spiderhead off. It’s been getting critical flack, but just take it for what it is: you’re not going to come away from this thinking about it for days, maybe with a changed view on life like a top flight sci-fi. Instead you’re watching an eminently enjoyable b-movie and there is nothing wrong with that at all.

I enjoyed every minute of Spiderhead, despite the twists being given blatant foreshadowing, and it did what a good B does: fill some time with fun. Chris Hemsworth seems to be enjoying himself too.