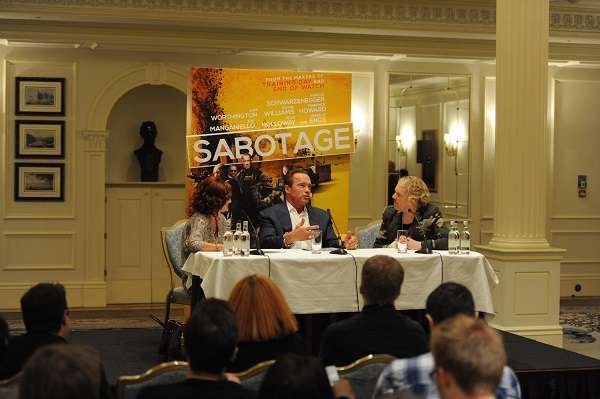 Currently in cinemas is the hard-hitting Sabotage (reviewed here), starring action megastar Arnold Schwarzenegger. Prior to release, we attended the press conference, chaired by the unfunniest person on telly/charming jester (delete as appropriate) Keith Lemon.

Arnie discussed how the roles that now appeal to him have changed since public office, the mooted Twins sequel and why he isn’t jealous of the action hardman du jour, Liam Neeson.

But first, an important question; has he kept any props from his iconic films?

Arnold: Yes, I have the original model of Predator in my office. My office is like a museum now. I have the different Terminator characters that I’ve played, the alligator from Eraser, the plane/jet from True Lies.

Keith Lemon: (Interrupting) I have a show called Through the Keyhole where I go around celebrity’s houses. Maybe I could come to your house?

Lemon: Could I come?

A: Yeah. Absolutely. Mark it down.

Lemon shouts over to his assistant to mark it down. Lemon’s press assistant laughs.

A: (mock anger) Don’t laugh. Just mark it down (cue general laughter). Give me a call.

So, has he been looking for more challenging roles since his return to acting?

A: No, I don’t have some master programme. I just think that it has something to do with getting to a certain age, especially coming out of the governing job, you see the world a little more complex, which is as it really is. You start getting attracted to characters that are more complex and those that are more multidimensional. I am attracted to those kind of characters now, whereas maybe 20 years ago I wouldn’t have been attracted to that very same script.

The next movie is Terminator, which I did not plan (for). It’s just that they bought the rights for future Terminator movies, and it came to me, and I felt very honoured that they had got me back into the movie. I loved that character, playing a machine.

At the same time, Universal studio is coming to me saying ‘we want you to play Conan’ and so I said, ‘wow, this is really great. I’m getting back to these old original characters who made my career’, but again, it’s not a plan. You know, I tried to make more Conan movies but the people didn’t own the rights who I wanted to do a Conan movie with. I wanted to do a Conan movie on a level where we had a budget behind it, a director behind it, because then it can be a successful movie.

Then, now, they are talking to me about Twins; to do Triplets. This is something I’ve chased for 20 years, so there you have it, right? Since we had come out of the movie (Twins) they say, ‘there’s no sequel, there’s no sequel, there’s no sequel’. And then they call me and say, ‘you remember how you said about a sequel? I think there’s a great…(trails off)’, but there’s a different studio technique now. It’s a new generation, the old guard has gone, there’s new people in there. So this is basically the way it happens. I do one project at a time. I don’t really have a theme or plan of this and that.

Some of those ideas work and some don’t work, but I believe very strongly in those characters.

Alongside Arnie and Danny DeVito, Eddie Murphy is lined up to star.

Has there been any rehearsals for ‘Triplets’ yet? How’s Murphy settling in?

A: We have not done any rehearsals, but I’ve met with Eddie several times. I admire him as an actor, as a talent. He’s very very funny and he’s going to look great in this movie. Perfect for Triplets as one of our brothers.

Liam Neeson has said that you’re fiercely jealous of his status as reigning action star.

What went into your preparation for ‘Sabotage’?

A: I trained for this film for 3 months, working with the SWAT team, working with the martial arts and the training and all those things, but, for instance, with Conan, I started a year because of the sword training. I hadn’t done any sword work before, so for me it was a new thing.

It’s one of those things that I think if you can do something casually every day, when the day comes to do the film, it becomes second nature.

I come from the bodybuilding background, where it’s all about reps. So, to me, I think that the same applies to acting. The more often you do a scene, the more you rehearse, the more you practice with the weapons, whatever you need to do the better you’re going to be in the scene.

Sabotage remains on general release. Feast your eyes on the trailer: