An adrenaline-fuelled rush of excitement greases the superhero wheel in this exciting turn out for Captain America.

This is a surprising post-match report. Instead of a noisy hollow shell or a dull po-faced treatise on politics and war, Captain America: The Winter Soldier is an entertaining compound of the best elements of the two.

Certainly, at about the half-way point, it makes one step back and ponder: has The Avengers (2012) galvanised this superhero? Before reaching that conundrum, you have to acknowledge that, indeed, disconcertingly, the film takes a little while to snap into gear. The directorial hand offers nothing but invention and panache consistently, but the story is a little slower off of the starting blocks.

However, once a set piece section involving Samuel Jackson’s Nick Fury and a car chase takes to the screen, everything clicks into place.

The story picks up with Steve Rogers in the modern day. He is struggling to adjust – a chucklesome moment of screen reference to this is sight of his notebook detailing all of the things that he needs to catch up on, which includes ‘The Beatles’ and ‘Nirvana’.

For Steve/Captain America, it does not take long for a bitter feud to come crashing into focus from an unexpected source. The Soviet agent, The Winter Soldier, is on a collision course with him. 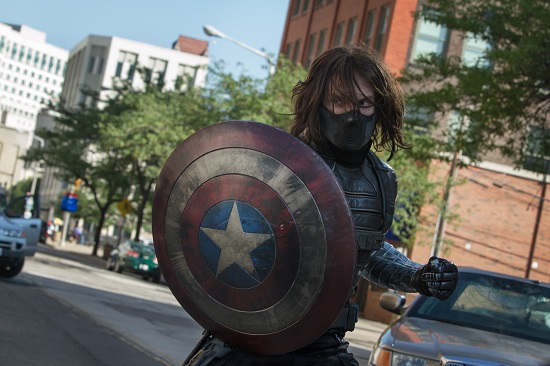 In the background is an intellectual plot, throwing engaging political twists on what could easily otherwise be seen as broadly clichéd motives.

As with so many modern action films, it could lose 15/20 minutes and not suffer any negative impact whatsoever. However, unusually, for the bulk of the time that this is on it punches at the right spot.

Certainly, one of the more surreal cinematic sights of the year might just be a shot of the Sundance Kid, Sister Julienne from Call the Midwife and Jim Robinson from Neighbours in conversation.

Casting facetiousness aside, they do form a formidable screen presence, particularly the famously politically-minded Redford, whose endorsement of this film should provide some assurance as to the quality of the story.

In the end, who says that spectacle and plot can’t share top billing? Captain America: The Winter’s Soldier makes no concession. You can have them both.

The bar has just been raised.

Follow that Guardians of the Galaxy and Avengers: Age of Ultron.

Captain America: The Winter Soldier is in cinemas nationwide from 28th March 2014.