French director Cedric Kaplisch rallies the troops for a 3rd colourful instalment in the lives of a group French men and women. Things certainly don’t run smoothly for this bunch. 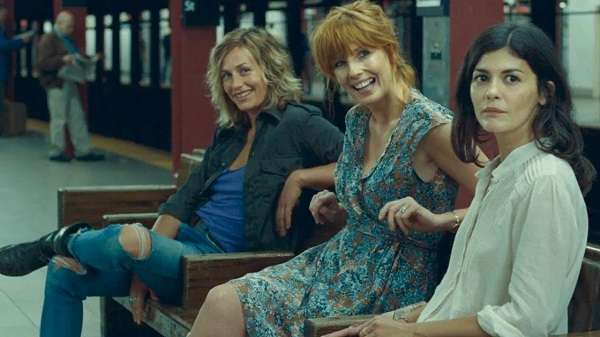 With flair and imagination, established French filmmaker Cedric Kaplisch (Paris (2008)) has sculpted a hopeful and gently funny feature film about a group of individuals in their late 30s/early 40s in Chinese Puzzle. Following on from the travails of these characters in 2002’s Pot Luck and 2005’s Russian Dolls, he has managed to secure the talents of his impressive cast, including Audrey Tatou, Cecile De France, Kelly Reilly and Romain Duris once more for this new outing.

A little older but not necessarily any wiser, this time around, Duris’ Xavier is embarking upon his next novel. Inspiration is disturbed by a complicated life. Especially when his wife, and mother of his two children, opts to move to New York. The relationship is a no-go, but he needs to see his kids. What does he do? Well, he follows them out there.

Opening with a credit sequence that could have you thinking you might be watching a video for a new Alabama 3 single, the approach is bright and breezy with a measured dose of panache. The colouring-in backstory exposition for the uninitiated is done with inventive use of paper cuttings that turns the 3D into 2D and back again. Throughout, there is an effusive propulsion that strives for affirming positivity, despite any dire straits that the characters may be placed in. The injection of surreal visitations from European philosophers to Xavier as he wrestles with his lot is done well and certainly succeeds as a surreal device in a way that Ed Gein’s interjections to Alfred Hitchcock in 2012’s Hitchcock failed.

Chinese Puzzle could easily be charged, however, with failing to portray the lesbian characters as anything other than one-dimensional sex-obsessed figures hell-bent on seducing anything with a pulse (that’s female). That is definitely a bum note. There is also concern that sentimentality ushers in cliche come the resolution. Yet these aspects shouldn’t overly detract from a work that manages to transcend classification as a mere exercise in genre. There is certainly a directorial sophistication that warrants attention and this glowing cast can’t fail to penetrate endearment.

Chinese Puzzle is in cinemas from Friday, 20th June 2014.