Cult king Jodorowsky returns with his first film in over two decades. Is ‘The Dance of Reality’ up to scratch?

Sitting through a Jodorowksky film is a bit like embarking on an imperious looking roller coaster: there are peaks and troughs, you may not be entirely sure you enjoy it at the time, but you will feel a degree of exhilaration afterwards irrespective of any nausea. For his first film in 23 years, the king of art-house wackiness has resorted to the maxim of ‘more of the same’. It is something that will delight the faithful. After all, at 84 (as he was at the time of the Cannes festival unveiling) time and age has not smoothed this auteur’s rough edges.

With his ambitious, wayfaring works El Topo and The Holy Mountain, the Chilean built a career on confounding, confusing, shocking and arresting the discerning cineaste. And, as always with his work, it is hard to dissect truth from fantasy: depth from shallowness. At times his vibrant cocktail of spiralling, kaleidoscopic imagery comes across more like a ford than an ocean of meaning. Nevertheless, he etches his daubs with enough ingénue to strike gold more frequently than mere granite.

Visually arresting as ever, The Dance of Reality proves once again that there is more imagination in Jodorowsky’s fingertips than most filmmakers have in their dreams. His is a masterwork collusion between profundity and speciousness; poignancy and banality. 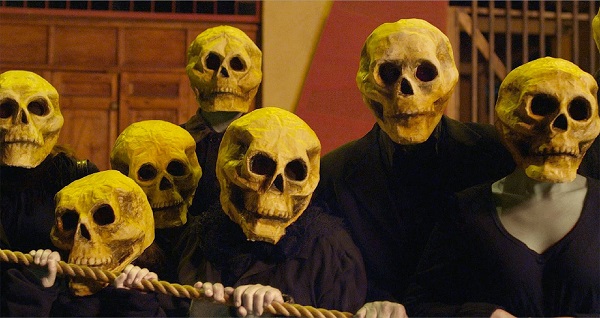 The story sits slack on an autobiographical theme, as the young Alejandro (affectionately Alejandrito to his soprano mother, played by Pamela Flores) faces coming-of-age and the trials life brings him. This is far from a straight story though. This is a fantastical romp through a feral imagination. Using metaphor and myth to conjure his ‘reality’, sententious episodes play out, offering parabolic lessons to be learnt in spite of the psychedelic touches infused by the master. He’s provocative, sure, and full frontal exposure, which includes a wife urinating on her husband certainly ticks that box, and this enfant terrible makes it unclear whether it is for kicks, pleasure or reaction. Or all three.

The ludicrousness of existence is something he has touched upon time and time again. He has done this by embracing ludicrousness. He wrestles still with the existence of God and he is as irked as ever with the greed of man.

This dance is erratic and freeform, undisciplined and chaotic, but there are some impressive chops in there. They don’t make ‘em like this anymore. Actually, did they ever? It could never be imitated; this is a performance piece from a one-off. This might not rank with his best, but there is enough here to warrant attention. Another one to file under ‘cult cinema, infused with madness, but equipped with redeeming features’.

The Dance of Reality is in cinemas and available On Demand from 21st August 2015.