The faint whiff of seaside town melancholia – that particular brand of English lugubriousness – greets our introduction to erstwhile model-turned-full-time-actress Agyness Deyn in Electricity. Perched behind a plastic screen in the change booth of an arcade, she chews gum and flirts mildly with a patron. She exudes a detached, nonchalant air.

It is from these innocuous beginnings that the narrative reveals itself. Her character, Lily, is bound by the volatile condition of epilepsy, which is as unpredictable as it is vicious; knocking her to the pavement without adequate warning. This is just the tip of her woes. Maltreatment at the hands of her mother (‘Mum chucked me down the stairs when I was two, because I wouldn’t stop crying’, she explains early on). The ravages of this poor upbringing affected Lily’s brothers, Mikey and Barry too.

When their mother dies, Lily and Barry convene. They sell their departed mother’s property. The proceeds is theirs to keep. Lily believes that the money should be parted equally between the three of them. The trouble is, she hasn’t seen Mikey in years. Barry says that he’s a lost cause and doesn’t know where he is. Although he implores otherwise, Lily sets out on a mission to find her errant sibling.

What unfolds is a peripatetic, quixotic affair. Deyn doesn’t simply star in this film, she carries it. What a refreshing pleasure it is to say that this former model is a natural. Imbued with an effortless charisma, she plays her character with nuance and subtlety. Whilst you might not always agree with the actions she takes or how she handles situations, you never question the veracity of the portrayal. 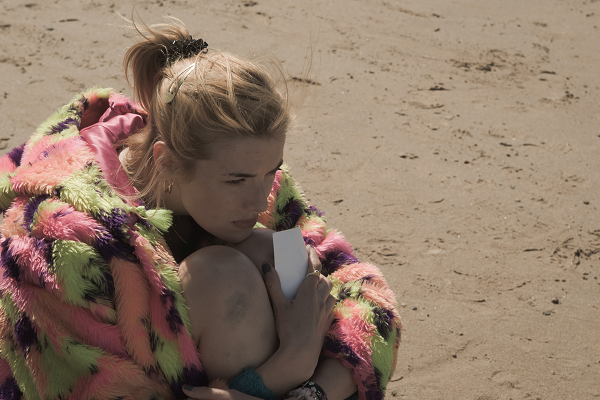 The camera floats with complimentary flair. This isn’t an exercise in technique at the expense of storytelling; there are flourishes of visual ingenuity tempered with pared-down direct relay. Some of the disorientating, foggy first-person epileptic episodes evoke Jonas Akerlund’s famed music video for the Prodigy’s ‘Smack My Bitch Up’. At other times, there is a faint hint of both Andrea Arnold (particularly Fish Tank (2009)) and Paul Wright’s For Those In Peril (2013) in terms of the cinematography and tone.

Where wrong steps are made, they are in the odd moments of character inconsistency. Lily clams up around Good Samaritan, Mel, but is more than forthcoming with waif Rachel, or Mikey’s ex Sylvia (a great turn by Alice Lowe). This is puzzling and could be a fault of the writing. There is also a climactic scene where the material strays a little too close to soap opera territory.

All in all, the complaints are minor. Electricity is full to the brim with interesting ideas. There is a gentle preoccupation with faith and yearning. Is this a spiritual pilgrimage from a battered individual looking for a semblance of security and hope in the face of debilitating conditions and experiences? Wounded and bruised, surely the key to survival is to keep on keeping on?

An assured lead debut from Deyn. A meticulous, dazzling direction from Bryn Higgins and a sturdy tale. A film that stays with you. Electricity was a London Film Festival highlight.

Electricity is on general release on 5th December 2014.