Baz Luhrmann’s Elvis released in cinemas internationally at the back end of last week, and proves to be a worthy addition to his portfolio of electrifyingly vibrant cinema. His latest work is an energetic, gyrating explosion of musical delirium both figuratively and literally. He delivers endless fun within a kaleidoscopic musical world of a kind only Baz can provide, fused with all things Elvis Presley. Well… for about an hour and a half anyway.

You see, Elvis starts out with a very clear direction and sense of self. Baz bends any sense of realism, bringing a sense of excitement and wonder to his films and playing on filmmaking’s ability to exaggerate every aspect within his worlds.

Unsurprisingly Elvis loses a lot of the energetic momentum it creates for itself early on. When it comes to wrapping up a very personal story, Elvis almost becomes somewhat of a drawn out obituary to the great man. This is understandable given his tragic end but acts in opposition to the highly stylised and eccentric world it establishes from the outset. But in a way that lends itself to the fact that Elvis’ agonising story, in a similar vein to the untimely demise of Freddie Mercury in Bohemian Rhapsody, the perfect tale for a biopic.

Regardless, the loss of wind in its sails doesn’t matter all that much. The performances and musical beats of Elvis undoubtedly keep it from going completely stale in its final third. First and foremost, Elvis is about the relationship and central dynamic between the King of Rock & Roll and his wily manager, both played magnificently by Austin Butler and Tom Hanks who relish the creative potential of these roles. 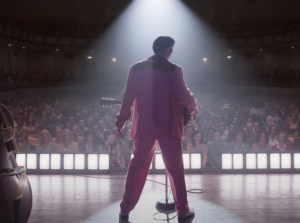 Whichever way you spin it, it’s Austin Butler’s performance that’s all anyone has talked about in the build up to Elvis’ release and will likely be the lasting legacy of the film. He embodies The King magnificently, often making you second guess whether you’re watching Butler or the real deal. His kinetic joy when performing this role translates into the heartbeat of this film and, crucially, translates through to his audience.