April 1945. The last chapter of the Second World War. White text on a black screen informs us that the Nazis have implored every man, woman and child to fight for National Socialism. It is from within Germany that we enter, with a wordless passage and a mounted horse. Appearing through the war ravaged wasteland, the German officer atop the mammal is ambushed by a swift and decisive Wardaddy (Brad Pitt).

Fury, the second feature of 2014 for the prolific director David Ayer, is a considerable step-up from the DEA-unit-with-an-ASBO blood fest, Sabotage. Joining the aforementioned Pitt, there is a weighty cast, including Michael Pena (End of Watch, American Hustle), John Bernthal (The Wolf of Wall Street, The Walking Dead) Logan Lerman (Noah) and Shia LaBeouf – the latter of which underwent extraordinary lengths to prepare himself for the role, including slashing his own face with a knife, pulling out one of his own teeth and deliberately not showering while filming.

Lerman plays Norman. Despite being out of place and unprepared, he is sent to join the battle worn tank crew of Pitt and co. They are in no mood for newbies. He receives short shrift, whilst being openly stunned at the barbarity and the murky moral hinterland that even his compatriots ply. He is the audience’s window and we both grow as time ticks by. There are few clean-cut, straight-down-the-line heroes on the frontline. 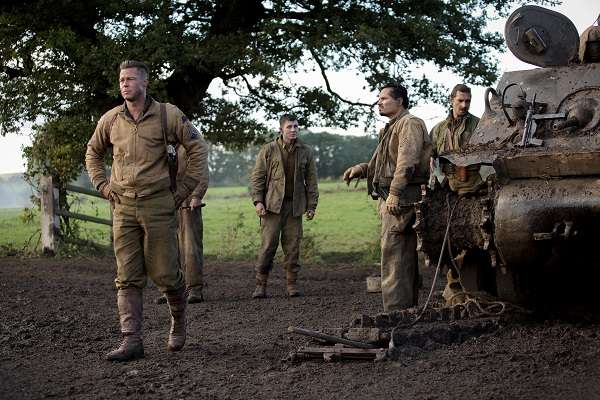 Ayer’s camera determinedly invokes the unglamorous side of war. In going down this route, he offers more than a passing semblance to Oliver Stone’s Platoon (1986). Director of Photography, Roman Vasyanov, has done a fine job to carve out a relentlessly dreary landscape to aid this vision. It is one that musters an appositely glum playground for these disturbingly inhumane activities. Perhaps inevitably, considering Pitt’s involvement, one cannot help but recall a thin similitude with Inglorious Basterds (2009).

At times, Ayer is guilty of some hackneyed action and trite characterisation. For all the adrenaline rush of the battles – which does include a wonderfully well-choreographed showdown with multiple tanks – it is a lengthy townhouse scene that elicits the greatest emotive response. It is here, in a section that the actress Alicia Von Rittberg confirmed took 2 months to shoot, that Fury hits hardest.

At one point, Pitt’s Wardaddy turns to Norman and observes, “Ideals are peaceful. History is violent”. If there is one thing Fury tries its best to convey, it is this, along with the fact that there is always good/bad on each side and within each person. It is a notion that palpably ripples through this flawed but ultimately decent film.

Fury is on general release on 22nd October 2014 in cinemas nationwide.