After his highly acclaimed drama, Downfall (2004), any sort of return to the Hitler-era must have seemed like something of a fool’s errand to director Oliver Hirschbiegel. However, it would appear that the true life story of Georg Elser held a pulling power that he simply couldn’t resist. Understandably so, too. It is remarkable and deserves greater exposure.

In 1939, not long before the advent of the Second World War, whilst the bulk of the nation were being seduced by the warped ideologue of National Socialism, Elser (played here by Christian Friedel) constructed an elaborate plan to assassinate Hitler. As we all know, it was a plan that failed. And yet, that does not prevent this film from taking a stern grip and being a fascinating document of and in itself.

Hirschbiegel frontloads his picture with act. From there, he dips into the past and runs a concurrent melding of the 1939 present and the historical. In the process, we unearth the man behind the plan. We learn a lot about the factors that might have shifted him irrevocably and fundamentally. After all, Elser was originally a mild mannered bystander; a musician of apolitical leanings who went from pacifist to engaged, determined and antagonistic participant. 13 Minutes manages to not only look at the fallout of his big act (his subsequent torture), but also the machinations of his trajectory.

This includes an illicit love affair with a married woman. Whilst this particular part of the film may stoke the embers of melodrama, the power of the central narrative pulls the material above and beyond any narrow categorisation. There is a holistic picture to be painted, of time, person and place. It is no paint-by-numbers job. We are the sum of our experiences and our experiences form our future motives. 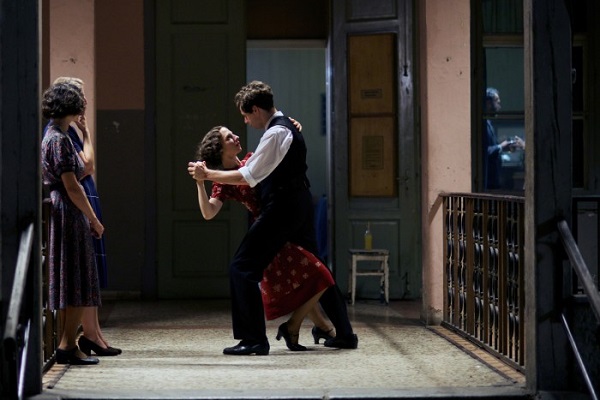 Whereas something like Haneke’s fictional The White Ribbon (2009) focused on an atmosphere of ill-ease within a small town in Germany in the lead-up to the First World War, this sheds light on escalating tension in a nation in thrall to a skewed dogma led by the hypnotic power of a seductive demagogue.

Solid direction and wonderful performances showcase a compelling look at principle, resolve and courage. It is one brokered with heart and impressive skill.

13 Minutes proves that Downfall was no happy accident; this is classy and riveting drama.