Interview: Kevin Corrigan on ‘Results’, working with Malick and a Monty Python photobomb

It’s more than likely that you’ve seen a film with Kevin Corrigan in it. You might not have registered, recognised or identified him, but there’s a good chance he was there. Having cut his teeth early in his career in Martin Scorsese’s Goodfellas, he has been a ferociously busy actor ever since, from such fare as Pineapple Express, Seven Psychopaths, Superbad and The Departed, and much more besides.

Now appearing in Andrew Bujalski’s (director of Computer Chess and Funny Ha Ha) indie-centric comedy Results, alongside Guy Pearce and Cobie Smulders, he takes centre-stage with a louche and laconic lead performance. Strumming a Gibson SG in a cavernous mansion, he takes to the keep-fit/gym world in order to upend himself from his stasis.

Catching some time with Corrigan, we spoke about a fascinating array of topics, including his encounter with Monty Python, a one-man Rocky II show, working with Terence Malick and the charms of the band Unknown Mortal Orchestra.

The characters in Results appear to have quite tragic elements to their lives. I detected shades of British humour. In fact, you make a mention of Monty Python in the film. What were the comedic influences that you channelled into this performance?

I have to tell you that I had the rare opportunity a month ago to meet Michael Palin. It was a huge moment in my life. I was working for the Tribeca Film Festival as a juror. I had access to all the different events that were going on. There was a 40th anniversary screening of The Holy Grail, so I had a plus-one pass. I said, how does a guy like me get to meet Monty Python? Some people showed me how to get to the green room before the movie started. And there they all were.

Yes. I was very daunted. However, once I made the decision to approach Michael Palin, he couldn’t have been nicer. He was the one that I always wanted to meet. I asked him if I could have a photo with him. A friend of mine that I brought along with me took the picture. Then I said, would you mind taking a picture with me and my friend and he was even nicer still. That turned out to be the best one, because it was a selfie and Terry Jones photo photobombed it. He came into the background. It was a really wonderful memento. 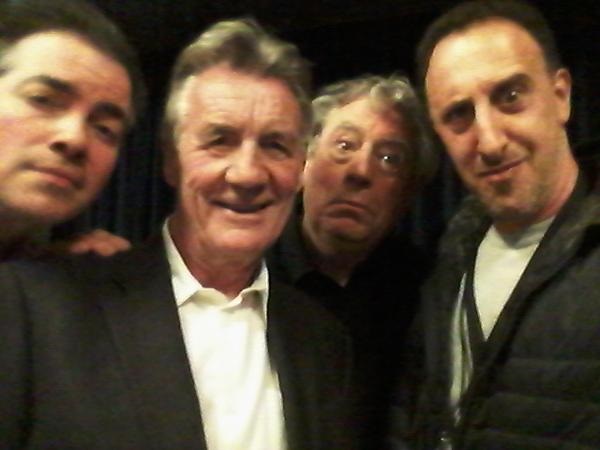 Then the Q&A was conducted by Jon Oliver after the film and it was one of the most priceless things that I have ever witnessed. It was like watching the Marx Brothers or the Beatles or something. They were just so ‘on’ and so original. Everything that they had a reputation for being, they still are.

To bring it back to Results, I’ve been a Python fan my whole life. Andrew Bujalski wrote that line into the script. It wasn’t improvised, but we share a sensibility and, I guess, it made its way in there naturally.  It’s interesting that you picked up on that, that there’s something in common with British humour.

How did the project come about?

Andrew and I were introduced to each other by another filmmaker, named Bob Byington. We met on the set of Bob’s film Registered Sex Offender, which was a comedy. We played therapists who share a patient, and we share notes about that guy. Andrew is a very good actor. We improvised a whole scene and it was a thrill for me to work with him in any capacity, because I was a fan at that point. He had made a movie called Mutual Appreciation that I admired. That was the beginning of our friendship and, over the years, we would talk about wanting to work together.

I guess that at some point we had started talking about 70s films. We both love John Cassavetes films. Finally, we got around to talking about the Rocky films. We were both fans of the Rocky films; well, him more than me, actually, in relation to the series generally. My cut-off point is the first two. Andrew insisted that they were all great and that I should see them all. I thought, well, this is Bujalski saying this. Maybe I was being too judgemental. Maybe there is something that I wasn’t perceiving; some levels of greatness!

I talked a lot about the first sequel, Rocky II, which is my personal favourite. I know all the lines from it. Andrew was impressed by that. He came up with this idea of a one-man show based on it and having me play all the parts. I just love that it sounded so bizarre and entertaining. He took it so seriously, that he had this idea that he wanted me to get in shape for it. That’s when I started to lose interest… He called my bluff.

Is this where you share similarities with your character, Danny, in the film?

Well, that’s where results comes from! It comes from Andrew not wanting to lose inspiration altogether. He thought there was good energy and inventive motivation in that Rocky II idea. He didn’t tell me that he was writing Results. He only sent it to me after it was finished, but he said that it was where it had come from; just wanting to preserve the spark that we had when we were tossing around that other idea.

There are quite a few clips of Danny playing guitar in the film. Are you a keen musician in real life?

Yeah, I play guitar, and I play bass in a group right now called Crystal Robots. They started out as a solo project for this songwriter called Daniel Harnett. He’s someone that I was a fan of and ended up playing bass for him and producing a couple of records.

Andrew had me playing guitar in Results, knowing that I play music in real life.

Is there any particular band or record that’s getting you going at the moment?

There’s a band called Unknown Mortal Orchestra that I really like a lot. The leader of that group, Ruban Nielsen, is like a cross between Syd Barrett and Smokey Robinson. He’s got a very psychedelic approach and an RnB vocal style.

You’re in Terence Malick’s Knight of Cups. What was that experience like for you? What sort of outline did you receive?

Yeah, that was a unique experience. He gave me fifteen pages of monologue to look at. He threw me some curveballs, for sure. He told me that I didn’t need to memorise all of it, but then, when I got to the set, he said, ‘I might want you to do some of those speeches, so I hope you’ve memorised them’. I was frightened, because it was the exact opposite of what he told me a few days ago. I said it to the script supervisor and she told me not to worry about it. But I did worry about it and I did the best I could to memorise all of it. There were long stretches of that stuff that I was able to get out. He would end up moving the camera away from me anyway. It was, like, hand held stuff and I would be in the middle of getting out some of this speech and he would see a seagull or a stray cat. ‘Woah, let’s get that!’ right in the middle of the take.

Was it a surreal experience?

Yes. Very much! But enjoyable to be around; seeing how that guy works.

Results embraces the indie sensibility. In this day and age, I would say that this is something to cherish.

I agree, Greg. If you look at what the top 10 movies were that people were going to see 30 years ago, there was a lot more acting going on: stories about people. It doesn’t seem to be a big priority these days.

Results is in cinemas and On Demand from 29th May 2015. Our review is here.