Writer/director Kelly Reichardt has taken a step towards the mainstream in her latest release Night Moves. This story of activism and its consequences may not necessarily be a commercial anchor, she benefits from the box office pull of such actors as Jesse Eisenberg, Peter Sarsgaard and Dakota Fanning this time around.

Revered for her fiercely independent films, such as Meek’s Cutoff (2010), Old Joy (2006) and Wendy and Lucy (2008), this may not be the most satisfying of her works, but it is an unflinching and bold piece of cinema.

We sat down with Kelly for a chat.

What was the inspiration for Night Moves?

We started with this idea of wanting to shoot on this farm and Jonathan Raymond, my writing partner, knew all these farmers and had previously spent lots of time with them over years and years. He brought me there and introduced me to it.

It struck me that it was as though you two unrelated subjects united by a related theme that runs through it. The theme of consequence. What interested you more? Theme or characters?

It’s a character film, for sure. I’m interested in how people interact with each other and how they work as a group, which was something we were looking at in Meek’s Cutoff (2010) too, versus the individual, so there were those sort of themes. Also, the idea of feeling absolute about something and not really seeing the ambiguities of a situation until you’re the other side of it and done something that you can’t take back. That was interesting, and also the different reasons that people might have that might push them to do something really radical.

We thought in terms of these three characters, who are a medley of different people. Everyone would have their own motives, but then how would this group work together? How would they become one unit? And they do for a part of this movie. They have this task of going out in the evening to this dam and they really come into sync. They become individuals afterwards and have to cope in their own ways. 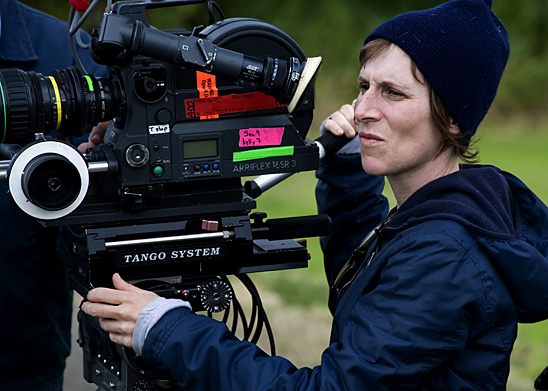 Did the writing process take long?

Yes, it did. Well, originally John (Raymond) had an idea for a short story that took place on the farm. It was more of a love story. It was much more of a dialogue driven piece, which is not really my thing. We moved away from that and we kept certain elements – there was a guy hiding out on the farm in the short story – and I was thinking of wanting to show the act. I wanted to break it down piece by piece and make it about small moments rather than a big sensationalistic thing.

Once that was decided, over the next year I went scouting and along with the scouting came meeting a lot of people. You end up in a lot of conversation and hearing their stories, the things that they’ve done and a lot of that ends up working its way back into the script. Things change shape over time. We spent 2 years on the script before I shot the film.

What can you tell me about casting? Did you already have the actors in mind before you started the process and was there much of a collaboration in that regard? Do they bring a certain shade to things that you hadn’t expected?

Sure, that has to happen because it’s no longer a fantasy.

Everyone has their own voice and their own gestures and we really don’t have much time for rehearsals. I mean, Jessie (Eisenberg) came out and went out and lived on the farm, so I had more time with him. Peter (Sarsgaard) I met in a boat on the way to shooting a scene. So you’re really figuring it out as you go.

All the films are very physical and require physical tasks and that means things have to get done. That keeps people in the moment, because they really have to do what they have to do. Otherwise they might drive a boat into a wall.

Do you find as a writer/director that it is sometime difficult to portray things that go against your own personal ethical code?

They’re all character films. There’s no message. I feel that as long as you can figure out the character’s motivation… I mean, I certainly have no interest in portraying any saints. I hope that these are films about all the different shades and ambiguities of life. There are no good guys or bad guys. There are just mistakes and decisions that are made. These films are not morality plays in any way.

In terms of inspiring an emotion in an audience, is there a particular emotion that’s most satisfying to you?

It’s a dual thing where you to control the path that the audience is on but you want them to take their own ride. It’s great if you have two people sit next to each other and leave with different opposing ideas about the film.