It’ll come as no surprise that in its opening minutes Jurassic World: Dominion promises nothing but bland filmmaking. That blandness comes in peaks and troughs. Given how many convoluted moving parts there are to the film, however, Dominion ends up being an overstuffed mess that offers very little in the way of innovation within this franchise.

Principally, ‘Dominion’ is a big-budget blockbuster all about a young girl and some locusts with a vast array of dinosaurs mixed in to cause some minor inconveniences to the many many characters involved. But fear not, they’ll never get into any danger because an uncharacteristically uncharismatic Chris Pratt (who manages to smile once in the entire 146 minute runtime) will be there to raise his hands at the dinosaurs like some kind of Dino-Yoda and save the day.

When it comes to the story, it feels more than likely that the writers simply sat down and thought of as many different outrageous scenarios involving dinosaurs that they could and wrote the story around these. And there are some brilliant scenarios, like Bryce Dallas Howard being forced underwater by a bird-like Edward Scissorhands dinosaur and a feathery raptor that (plot twist) can swim. Unfortunately every interesting scenario fizzles out into nothingness or evolves into an unimaginative chase sequence that we’ve all seen before somewhere else.

But when all is said and done, what can you expect from the sixth film in a franchise that seems to have no sense of direction? Like the Star Wars sequels before them, the first of these ‘World’ reboots was interesting, but anything after that has been pure business potential.

It gets extremely boring constantly saying that these big franchises should stop and die out like the dinosaurs. These films exist, there’s no changing that. And do you know what? That’s okay. It is summer blockbuster season after all, and who doesn’t like seeing dinosaurs go ‘roar’? 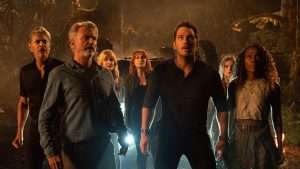 The CGI, unsurprisingly, is magnificent and Jeff Goldblum is at hand to provide a refreshing slice of levity. Without question the best thing about all of this is him as the audience’s metaphorical mouthpiece. He and the returning Jurassic Park trio provide every ounce of this thing’s charm and charisma and when they enter the fray Dominion becomes a far easier film to enjoy.

From the outset, Dominion promises a convoluted but visually inviting mess and delivers ten-fold. It serves as a timely reminder that there was only ever one good Jurassic Park movie, and it was made 30 years ago.