Kevin Spacey has been burning holes through TVs, tablets, laptops and phones the world over as Frank Underwood in the addictive and captivating Netflix drama, House of Cards. Many will also recognise his incumbency as artistic director of the Old Vic Theatre in London. It is a tenure that has lasted 10 years and it is a position that he is soon due to step down from in 2015. There is no denying that his presence and commitment has had a transformative effect on the fortunes of the Old Vic and indeed the landscape of live theatre in the West End generally since he took charge.

But it is in the capacity as a front of house theatre actor that this documentary traces its steps. The Bridge Project Company – so-called because of their mission statement to form a company comprised of both British and American actors – take their Sam Mendes’ directed production of Shakespeare’s Richard III on a world tour. This tour encompasses far flung locations such as Sydney, Beijing and a huge open air theatre in Greece, amongst others. 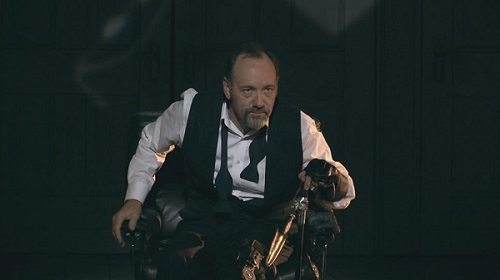 Whilst the documentary itself is unexceptional in many ways, there is plenty worth seeing. It is a fascinating postcard picture that showcases the fruits of dedication, stamina and execution. It also has a camaraderie at its heart that feels genuine.

However, the most pertinent question is whether there is enough material and enough of an angle to construct an adequate long feature. Whereas a tour film on a band or an artist can be interspersed with clips of different songs, all that can be reflected here is snippets of scenes from one single narrative. This means that it is inevitable that enjoyment of the documentary will be sizeably enhanced if one has prior knowledge/familiarity with Shakespeare’s Richard III. If you are, then you should consider Now: In The Wings On A World Stage as a trip worth taking.

Now: In The Wings On A World Stage is out now and can be bought here.