Oscar Isaac on being cast in the new ‘Star Wars’ film, Kirsten Dunst on Hitchcock and Viggo Mortensen on the unique appeal of ‘The Two Faces of January’ (2014). Plus film review.

Oscar Isaac on being cast in the new Star Wars film, Kirsten Dunst on whether she could have worked with Hitchcock and how the Greeks riots impacted on the shooting of this film.

In cinemas this weekend is the latest Patricia Highsmith adaptation (the novelist behind The Talented Mr. Ripley, Strangers on a Train), The Two Faces of January. Although our review is below, we caught some time at the press conference. In attendance; Kirsten Dunst, Viggo Mortensen, Oscar Isaac and the first-time director (Drive screenplay writer), Hossein Amini. 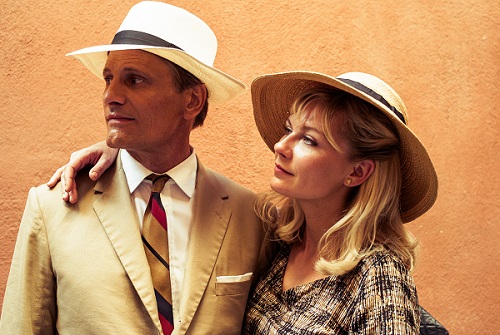 The Two Faces of January feels like a traditional Hollywood drama. Definitely a nod to yesteryear, with a cautious, thoughtful pace and a cinematic touch that evokes Alfred Hitchcock.

We asked the cast if it was the apparent rarity of this style of film – one that isn’t special effects-led, a biopic or one based on a historical event – that appealed?

Over to Oscar Isaac. “Absolutely. As soon as it got to me, I was like ‘of course, I would love to do something like this’, because these sorts of movies don’t get made very often.”

“Also, knowing that we were going to these places (appealed)”, Viggo Mortensen chipped in. “With technology now you can shoot and make it look like you’re in these places, but to actually be there was great. It was like an old-fashioned moviemaking experience”, he added.

He also said, “I think it’s one of those movies that is rare these days, in that it’s quite subtle. And because it’s subtle, and you’re the type of person who sees lots of movies, you can miss little things. What’s great about the film, when you see it the second time, you see even more things about the characters and the complexities of the relationships. Most movies aren’t that way. You see them a second time and you’re like, ‘hmm, it wasn’t as good as I thought’. You start to see flaws. Here, it’s the opposite. It’s a delicate thing.” 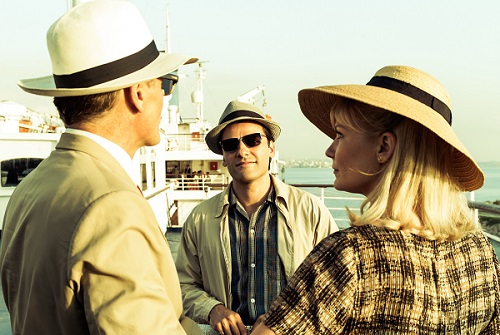 However, shooting didn’t go without some hiccups along the way. Oscar Isaac, in Kirsten Dunst’s words, became ‘really sick’ on seafood, whilst Oscar recounted, “also, the riots were on exactly the same time we were there”, he would explain. “ I finished shooting and went to see where all the tear gas was coming from, and I saw all these people running the opposite way with masks on!”.

Dunst would also explain the country’s culture and medication, “everything is solved in Greece by drinking Raki”. Hmm, perhaps not the economy, Kirsten, but we know what she means. “Everyone just gives you those.. do you remember those plastic bottles? ‘Thank you for coming to our restaurant. Here’s a plastic bottle full of Raki’. We were like, ‘we don’t need this!’ she laughed.

With the recent announcement of his place in the new Star Wars film, what is Oscar Isaac’s feeling about the whole thing? And when does it start shooting? ““End of this month. It’s incredibly exciting. I grew up with my family being huge, huge fans. My uncle and cousin collect the toys and we would have Star Wars parties. So, when I told them, they had the biggest nerdgasm! There’s nothing I could have said, or will ever say, that could possibly top it. That is it!”

As for Kirsten Dunst, considering the feel of the film, would she have liked to have been one of Hitchcock’s blondes? “I heard he was a real piece of work”, she said, “but I’ve worked with some real pieces of work. I think I could have handled Hitchcock! I’m a Hossein Amini blonde!”

The Two Faces of January is in cinemas now. Our verdict is below. First, here is the trailer:

In and amongst the beautiful, sunny climes of the Mediterranean, a couple spend their vacation. It is the 1960s and this twosome sway glamorously with a gold-plated charm. It is a charisma that drips off of their honeyed expressions. Yet, all is not quite as it seems. The couple, Colette and Chester, played by Kirsten Dunst and Viggo Mortensen, respectively, are con artists. They have a dark past, but it is soon clear that their future will map itself out with more complications than any of their highly sophisticated tricks.

Hossein Amini has directed with careful consideration to the nuance of the source material. His camera imbues the clammy sensibility of the narrative and the scorching heat of the location. As things progress with roughly hewn spontaneity, the camera take its intrusive stare into the characters interactions. Turmoil is a device that is ramped up in a gentle way. The tension is mounted in the accumulation of the events, and the direction, the setting and the execution pummels the viewer with an exquisite engagement.

The Two Faces of January certainly echoes Hollywood period Hitchock, coming off as the hybrid of The Man Who Knew Too Much (1956) and North by North West (1959). This may not be as relentlessly adrenaline inducing as the latter, but this old-fashioned drama is stitched with the finest of fabrics; a strong script, a sturdy directorial hand and truly wonderful performances from a cast that clearly relished their roles.