Further to our first dispatch from EIFF 2014, you’ll find reviews below of Eli Roth’s directorial return, Michel Gondry’s hand animated interview with Noam Chomsky and a Syrian-American girl’s challenge to the Syrian government from the confines of her bedroom. But first…

James Franco’s picture of life imitating art has finally been unleashed onto the British festival circuit in Palo Alto (3.5/5). Helmed by Gia Coppola – the latest filmmaker from the Coppola dynasty – it is a teen-based drama interweaving the exploits of a number of high school students. Also written by Coppola, Palo Alto thankfully eschews any venture into schmaltz. it does a good job of capturing the throes of youth and the hormonal zigzagging yoyo that comes with that period in a young person’s life. There is a realistic touch to the late night partying scene. The role of creepy teenage girls’ sports coach goes to Franco and, in light of his recent media attention for attempting to seduce a 17 year old Scottish girl through instagram, it adds a further dark and uncomfortable frisson to the activity on screen. 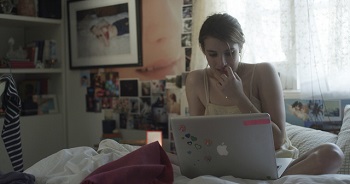 Whilst a lot of the characters are not particularly endearing, the emotional entry point is Emma Roberts’ April. Representing the heart of the film, she holds everything together with a brilliant performance that is the match of the script written for her. Whilst the series of vignettes fly by like the flick through a picture book, the gluttonous libation pales in the shadow of possibly the greatest number of cigarettes smoked in any film made outside of the French border.

Whilst Coppola’s film fails to look at the consequences of the decisions these characters take in the long haul, the journey that we accompany them on is engaging. This is an interesting exercise that feels like a step in the right direction for its key players.  Who knows; maybe the door could open to revisit these protagonists further along down the line? It might provide a curious return. 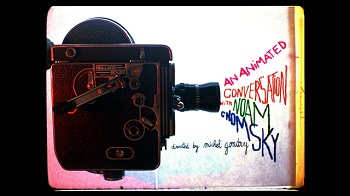 Frenchman Michel Gondry has undertaken a clear labour of love in the documentary Is the Man Who Is Tall Happy? (4/5). Hand-drawn animation documents an interview with linguist, philosopher and logician Noam Chomsky. Featuring nothing but the typically inventive and startling Gondry touch when it comes to the visual presentation, it is also a fascinating journey into one of the greatest minds alive on the planet today. With a bare honesty, there are all the chinks in the language-barrier misunderstandings and tetchy exchanges that you might expect. Refreshingly kept in the can and not tossed out in favour of a smooth ride, it means that the viewer really does feel as though they are sitting in on the conversation. Some of the drawings are reminiscent of Don Hertzfeldt’s offerings in something like It’s Such A Beautiful Day (2012) or Everything Will Be Okay (2006). As for Chomsky’s own theories, at times it can feel as though he is just riffing on the works of Kant, Locke, Hume, Pirsig and Plato. Then again, that’s the measure with philosophy and linguistics, I guess.

Horror porn/splat pack maestro Eli Roth has made a return to directing after an elongated 6-year absence and has offered up cannibal movie The Green Inferno (3/5) as the fruit of his exploits. Initial impressions are reasonably good; he manages a subtle juxtaposition between the cosy and secure confines of a western culture when mirrored against the primitive and carnal impulses of tribal life in the Amazonian jungle. He also offers an interesting critique on the do-good meddling’s that, no matter how well-intentioned, can lie at the heart of activism.

How does it all pan out? Well, a troupe of ecologically aware and well-meaning college students embark on a protest stunt in the amazon rainforest to prevent a multinational company from destroying the natural habitat surrounding an ancient civilisation. As things go predictably awry and blood begins to spill, one thing is for certain; there will be no green peace in the green inferno.

A typically bloody affair, if the tense opening lets everyone down once the chaos reigns, it is an enjoyable romp that should keep fans of the genre satisfied. 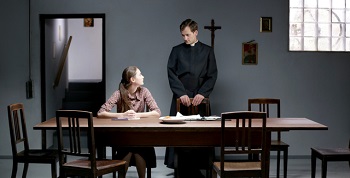 On the other side of the equation in terms of tone, content and delivery, the winner of the Student Critics Jury Award, Stations of the Cross (4.5/5), is a startling work. By invention and by design, and with some similarity to the oeuvre of Hungarian Bela Tarr, it is capable of inspiring frustration, anger and admiration in more or less equal measure – and frequently simultaneously – during its runtime. Told in 14 shots, the narrative invokes Jesus’ carrying of the cross as transposed metaphorically to a young German girl preparing for her confirmation. What ensues is a case of boy likes girl; girl likes boy; religion gets in the way.

The German director, Dietrich Bruggemann, nods and winks all through the material. The name of the au pair, ‘Bernadette’ has religious overtures, just like our heroine, Maria. The opening scene, ‘1. Jesus is condemned to death’, finds the camera lodged, looking on like Da Vinci’s painting The Last Supper; framed around a room in which a table sits centre with a priest in the middle. Either side, there are the pupils of his Sunday school. As a question and answer session unfolds, the demands of the faith (and of the priest himself) brokers both astonishment and relatable rationale. This is a non-judgemental engagement with those who devoutly believe in pantheism.

Beauvois’ Of Gods and Men (2010) echoes in the tone of Stations of the Cross. That is no bad thing. It will baffle and endear, whilst the cumulative power of the story as the chapter’s progress bubbles like a shaken can of fizzy pop, before all chaos is unleashed come the close. Startling. 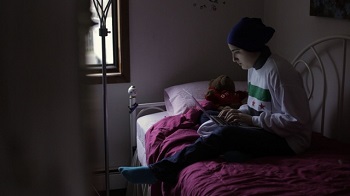 Less balanced in terms of emotional register is the incendiary #chicagoGirl – The Social Network Takes On a Dictator (4.5/5). Not many realise that a number of the protests taking place in Syria against the Syrian government are orchestrated by a 19 year old freshman all the way over in the United States from the comfort of her bedroom. Unfortunately for her, the Syrian government do realise. In what could be seen as a spiritual companion piece to 5 Broken Cameras (2011) and this year’s Oscar-nominated The Square (2013), this is a pugnacious rallying cry against the mindless, wild and shockingly violent oppression and persecution of the underclass by the incumbent powers that be. It is an enraging document, cut with taut skill and care, managing to elicit every single possible measure of disdain from the viewer. Essential viewing.