Saving Mr. Banks – Out on DVD and Blu Ray

Disney magic wrapped up in a film tracing the making of a children’s classic.

It would be easy to knock Saving Mr. Banks. After all, it takes the familiar and bathes lavishly in it; dancing and finger clicking its way through a whole host of Disney’s most well-marked tropes.

There is too, the fact that in following two individuals locking horns and engaging in a battle of wills, it is the sort of true story material that screenwriter Peter Morgan (Rush, Frost/Nixon, The Queen) has already documented so well over recent years (and thereby possibly exhausted).

The author of Mary Poppins was P.L. Travers (played here by Emma Thompson). In 1961, after 20 years of haggling, she finally waved the white flag of consent to Walt Disney (Tom Hanks) for a film version to be made of her source novel.

However, where she may have acquiesced to an adaptation in principle, her lists of demands and rules were considerable. She would not come around to a ‘Disneyfication’ quietly, if at all.

Where last year’s Hitchcock made an ill-judged attempt to shed light on Hitch’s making of Psycho by chucking in a bunch of jarring flashbacks that were unnecessarily surreal, this is a great deal more traditional in how it tackles matters. As a result, there is a firmer grip on the structure and a more satisfying flow. 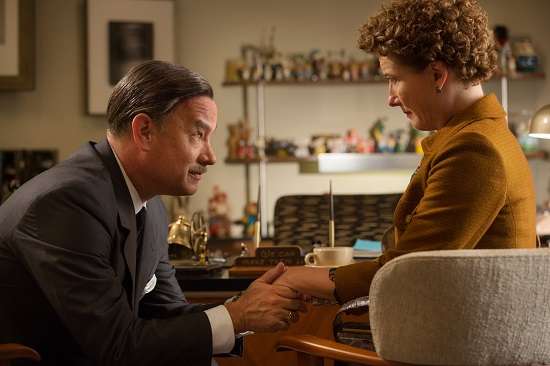 Whilst dosed in a heady glaze of warmth, Saving Mr. Banks is about loss; loss of control, loss of time and loss of life. It is in the face of this that it becomes ultimately affirmative.

As the story takes its steer to the finish line and the final furlong is entered, the cynic is overturned by the chugging momentum of affection poring off of the screen.

We all know of the timeless charm of the Mary Poppins film and how that all worked out in the end. It goes to show, that just as Stanley Kubrick experienced with Stephen King on the Shining and Anthony Burgess with A Clockwork Orange, authors aren’t always the best judge on turning their pages of print into celluloid gold.

Disney appear to be going through a renaissance period recently. Both this film and the musical animation, Frozen, have been critical and commercial success stories. There is something heart-warming in that. After a while in the wilderness, it is nice to have them back in from the cold.

In the case of Saving Mr. Banks, it is a delightful family film laced with a chintzy charm and a twinkle in its eye.