After the nerve calming success (lest we forget, one that was met with both commercial and critical spoils) of Star Trek’s 2009 eponymous effort and its 2013 sequel Star Trek: Into Darkness, we now have to brace ourselves for some change with the latest instalment.

That’s because, safe hands JJ Abrams (a moniker he surely deserves?), has stepped down from his Kirk-like perch in the Star Trek reboot enterprise, to something altogether a little less involved (more of a Uhura role, perhaps?). Should we be worried? After all, this time we have Justin Lin of the Fast & Furious franchise fame sitting pretty at the helm, whilst Abrams steps into a producer role. 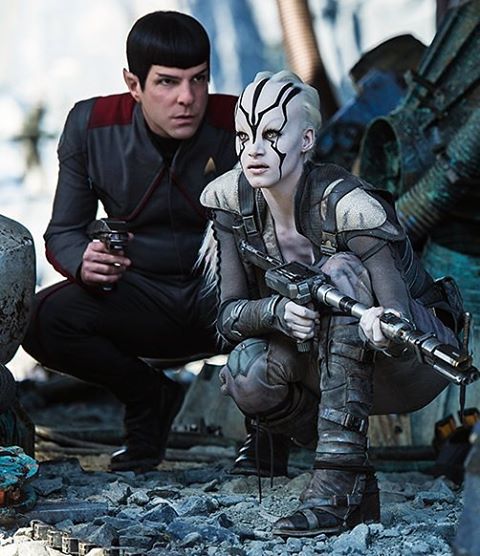 On the first leg of their five year mission, the Enterprise comes to the aid of a distressed individual. Sadly, this leads the troupe into trouble and they end up stranded on an unknown planet without any clear idea of rescue. Separated, down, but not out, they combat the elements with fortitude and perseverance. With a story co-written by Simon Pegg, it is easy to identify that his role has been plumped up. A little bit of writer’s bias, maybe?

The foe this time around is Krall; a powerful and vengeful former Starfleet officer who looks like an unflattering caricature painting of Tottenham and England star Harry Kane. Once this connection is made, it is hard to shift it. Although the true identity is revealed in the trailer, it wouldn’t be right to reveal who this is here. 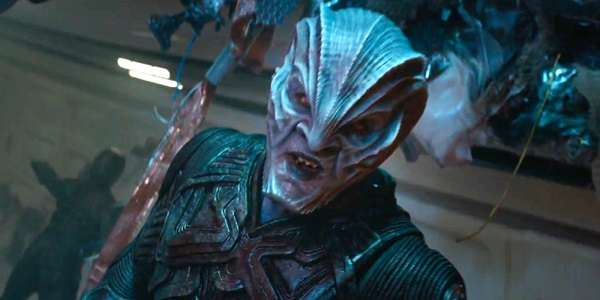 The flaws are many; the virtues are few. For one, the story feels like an elongated episode of the original series. There is nothing too much to commend about a work that feels as though it is in place to continue the saga and without a true sense of purpose. Consequently, you feel as though this is a holding pattern exercise awaiting the next release.

A heavily edited use of Beastie Boys’ ‘Sabotage’, which references the 2009 feature, is not as inspired in action as it might have appeared on paper. The whole thing is swamped with a latent visual effects and sensory overload. It is at these junctures that this erstwhile well-respected blockbuster series dips into an anonymous and insipid quagmire along with all of the other forgettable summer releases. Therefore, it is only during some of the more quiet moments that there is any true satisfaction and, as ever, the exchanges between the main crew offer light relief and a pleasing chemistry.

Although the spectre of death hangs over Star Trek, with both Anton Yelchin and Leonard Nimoy no longer being with us (the latter affectionately and knowingly referenced; the former being a recent and premature post-completion tragic loss), this is a film preoccupied with big, raucous action.

As a consequence, whilst this gives us bluster and bangs for the buck, all in all, it’s hard to give a flying fff…