When it comes to comedy, the line is thinner than ever before. There are endless debates as to what you can and can’t joke about. Taskmaster isn’t burdened with any of that.

Taskmaster is a concept by comedian and musician Alex Horne who also co-presents it with Greg Davies. It started out as a show at the Edinburgh Festival Fringe in 2010 before making its way onto television in 2015 – first airing on Dave before moving to Channel 4 in 2020.

It simply comprises of five celebrities – mainly comedians – attempting to complete a series of challenges. Alex Horne acts as the umpire and Greg Davies is the ‘Taskmaster’ who is given the task of judging the contestants’ performances and awarding points.

Why does Taskmaster work so well?

Aside from the format having some very clear beats, a huge amount of praise must go towards the casting. When you throw five very different comedians together there’s no guarantee the dynamic will work. Taskmaster has managed to create casts of comedians who have a strong camaraderie and the ability to bounce off each other extremely well.

While there is a competitive element, it’s all played for laughs and subsequently adds to the fun. The lateral thinking and hilariously bad performances are equally thrilling to watch.

As viewers we become invested in the scoring. “Will Judi Love finally win an episode?”, “Will Chris Ramsey hold onto his lead for the whole series?” and so forth, not to mention moments where contestants were disqualified/received no points such as Joe Wilkinson’s potato throw and Mark Watson’s individual task. 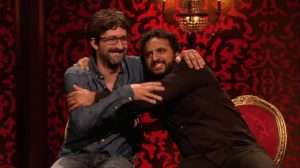 Despite being a comedy-entertainment show at its core, Taskmaster has the unique ability to get viewers engaged in the game itself.

The dynamic between Alex Horne and Greg Davies is a huge part of Taskmaster’s success, particularly Greg’s ability to bounce off the vibe in the room.

From 2020 to 2021 the comedians were separated due to COVID restrictions, and the audience laughter was recorded separately. The return of the studio audience in 2022 elevated the show and revived the excitement which Taskmaster thrives on. The live audience really make Taskmaster; the comedians’ ability to bounce off them is something the show would be worse off without.

Taskmaster produces comedic moments a-plenty which contributes to its cross-generational appeal. Children enjoy it as much as adults – so much so that Channel 4 have made ‘bleeped’ editions of the show available on All4. Taskmaster is a gold-mine for wry, British humour which also provides plenty of moments of contagious laughter.

I rate Taskmaster a 9 out of 10. In an increasingly hostile world, it’s heartening to have a show which is just ‘nice’, with no malice or negativity attached.