Decimated land and bulldozed communities. Thatcher had called the mining contingent ‘the enemy within’ and mowed them down. This is called Still The Enemy Within and this is their story.

It was George Orwell, no less, who, in 1949, handpicked 1984 as the year and title for his literary magnum opus chronicling a totalitarian state. It is was by sheer coincidence – and no more – that 1984 brought to head a clash between the working class proletariat and the government that culminated in Britain’s longest ever strike.

Without the use of politicians or experts to talk about the events, Owen Gower’s film steers its focus merely with use of the miners themselves. This is both a strength, and something that plays to its detriment too. You could certainly say that this is agenda-driven filmmaking.

And yet, with that taken aside, the commendations are many. The miners, without exception, offer an articulate and eloquent account of the bitter entanglements of the period. Gower intersperses these recollections with both archival footage and even some black and white reconstruction pieces. 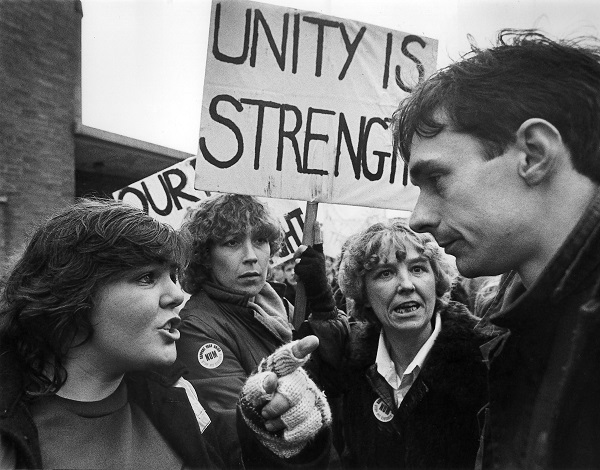 In terms of angle, the film does eschew adequate analysis of some of the finer gory details. For example, with the furore gripping the nation, Gower doesn’t quite scrutinise how the requirements of democratic action were forfeited on both sides. After all, union leader Arthur Scargill did not acquiesce to cries for a ballot on the strike action. It skirts over the death of David Jones too, and doesn’t quite jump into the ferocious melee of the picket lines quite as it could.

Is there anything cinematic about this film? Not really. Yet it is to the film’s credit that it doesn’t make the work any less engaging for that reason.

What we are left with is a paean that makes it clear that whilst the mining communities may have been hushed into silence of labour, they remain a noisy throng of disgruntlement. It is certainly sad to see how the manufacturing industry of Britain has been rendered obsolescent and how the ghosts of a former age continue to haunt those in the present. Still The Enemy Within offers a deserved requiem and a stoic coda to both the people and the times.

Still The Enemy Within is in cinemas from 3rd October 2014