Okay, this is a strange one. Without thinking too much of Who Framed Roger Rabbit? (1988), this is a mix of live action and bizarre animation.

Robin Wright (House of Cards, Forrest Gump, Princess Bride) stars as a fictionalised version of herself in a world much like our own; a place where the imperial march of technology digs away at the emotional core of everyday living in a bid for economy, ease and efficiency.

In a roundtable meeting, it is made plain to both her and her agent Al (Harvey Keitel) that she will be contracted to play out one last acting role. She is now too old (the scoff to make is that she is merely in her 40s) and faces diminishing box office returns. She faces life on the scrapheap.

Her final performance will therefore be a full body scan of her expressions for future use. Her conveyance of these emotions will enable the studio, Miramount (see what they did there?), to replicate her digitally forevermore. They will project her as her younger self and she will be kept in a chrysalis state of perpetual youth. 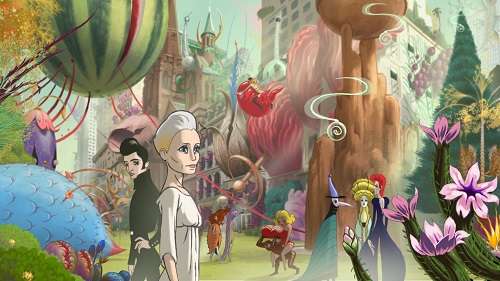 The sole caveat of the contract is that she suspend her free will insofar as her desire to act in any way shape or form in any location ever again. Whilst she is wrestling with this choice, her son is struggling with deteriorating hearing and eyesight. She is aware that he will require constant future care.

These matters are thrown up into the diegetic air to enforce thoughtful speculation, before The Congress fasts forward 20 years and the real cinematic flamboyance begins.

The most astounding aspect of this feature is that it has been released by a major and with so many big names attached. This is meta cinema. A story stemmed from the pen of Stranislav Lem (the man behind Solaris) and is as complex and as hallucinatory as you could possibly imagine. For the opening hour, this is live action satirical drama. But then the real fun starts.

For the second hour, it is an animated voyage into an acid trip from hell. For this, think Hayao Miyazaki, Yellow Submarine and Dali in a blender, with added touches of director Ari Folman’s previous feature Waltz With Bashir (2008).

The fact that the story becomes fractious and loose beyond measure is a consequence of its grand ideas. Unfortunately, it is not of the clout or pointed idea of purpose as something like Alejandro Amenebar’s Open Your Eyes/Vanilla Sky (1997 and 2001, respectively), but it does offer some food for thought.

It is a tricksy and not altogether successful endeavour. It is a triumph of risk and ambition though. In a landscape where film studios play it safe, this is a wonderful reminder of the power they have to embolden our lives with art that tests, entices and pushes audiences to the boundaries of comfort without resorting to gratuity in order to do so.