Say hello to one of the best comedies of the year. Okay, so this may be slightly tongue-in-cheek. The fact remains, however, that this feature based on the experiences of the Canadian Iranian journalist, Maziar Bahari, at the hands of the Iranian government contains more than its fair share of genuine ‘lol’ moments (what a hated acronym that truly is).

Sourced from Bahari’s book Then They Came For Me, it is Jon Stewart – that sardonic source of late night American satire – who is the director and screenwriter. It is an admirable effort, but sadly, tone-wise, it is also a confused film. 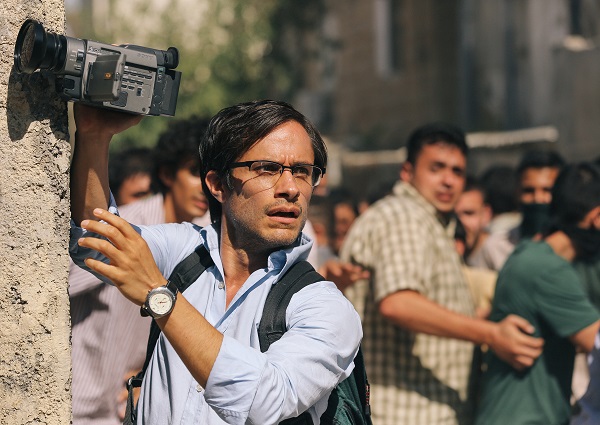 Bahari (played by Gael Garcia Bernal) is an intrepid journalist for the American publication Newsweek. With a pregnant wife in Canada, he nevertheless finds himself pulled back out to Iran. Whilst there, he will visit his mother and cover the upcoming elections. Culling help from an enrolled assistant, in the form of Dimitri Leonidas’ taxi driver, Davood, Bahari seeks interviewees on both sides. He witnesses noticeable stirring in favour of the challenger to incumbent president Mahmoud Ahmadinejad. Therefore, once the 2009 election is declared a landslide victory in favour of Ahmadinejad, alarm bells begin to ring across the country. Demonstrations take place and the wider world takes notice. It is only once Bahari’s camera is witness to the government taking shots at its own people that he becomes the focus for incarceration and torture.

Steering the camera in a style similar to Winterbottom’s A Mighty Heart (2007) and Gaghan’s Syriana (2005), with sepia tinges and plenty of grimy pale colours, archive news footage rests within the depictions of unrest. This gritty approach is at odds with the humour sprinkled throughout the film. It may be no surprise to learn that Stewart’s wit is razor sharp and offers incessant amusement. As much as a seemingly effortless way with comedy is a welcome interlude in everyday life, in the context of such serious material, the sugar is more than a spoonful to help this particular medicine go down.

Bernal’s performance offers a reliable everyman charm, imbued with his usual charisma. Yet it is noticeable that despite the fact that his imprisonment finds horrific treatment, he is clearly tailored and groomed extremely well. His baby blue shirt is ironed and spotless and his beard and haircut remain expertly coiffured throughout his ordeal. Say what you like about Iranian governmental torture but they give a good haircut.

Jokes aside, Rosewater engages, despite being marred by its tonal inconsistencies. The serious point of a vicious government committing appalling acts in the name of status quo preservation is an ill that shouldn’t be ignored. This could have been better and it is a disappointment that the praise couldn’t be unanimous.