See Foo Fighter Pat Smear in 1979 talk of hitting girls, see Lemmy provide the etymology for the term ‘headbanger’ and see Ozzy Osbourne ruminating on heavy metal from his kitchen whilst attired in a leopard print dressing gown. Shocking and absorbing; the hardcore punk and metal scenes of LA are brought to DVD in the long-awaited release of The Decline of Western Civilisation.

When Penelope Spheeris marched into the grotty music clubs of LA in 1979 with her camera in tow, she didn’t necessarily expect it to mark the start of a curious on/off relationship that would span almost two decades. The outcome of her experiences were documented in the trilogy The Decline of Western Civilisation. Long out of print and much sought-after, the cult cache of her odyssey into the fringe culture of the LA music scene has only grown in stature in the intervening years.

Now released onto DVD for the first time, and arriving 18 years after the final instalment, it stands as an ever fascinating time capsule piece; looking strangely arcane and yet also ghoulishly timeless, as the degenerates and the visionaries of former eras greet audiences afresh.

Part I offers focus on the burgeoning early steps for the hardcore punk scene between 1979 and 1980, Part II delves into the Spinal Tap ridiculousness of the hair metal ’87 and ’88 years and the final part settles down in the late 90s, as the gutter punk lifestyle gets the spotlight treatment. 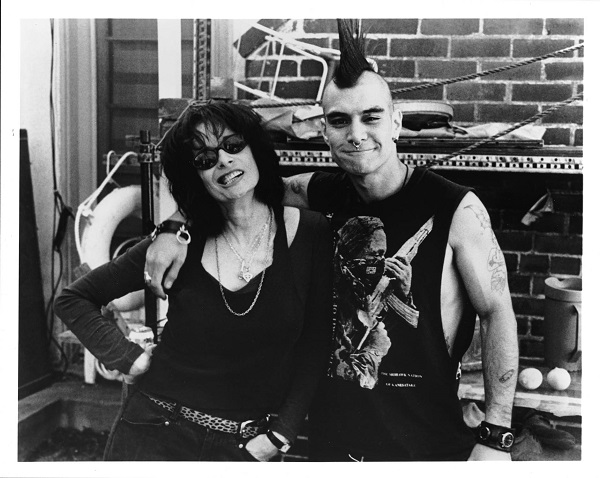 Across the board, there are fascinating insights into the formative stages of bands that would go on to be seminal artists within their genre, including Black Flag and Germs; to Megadeth and Poison. The one thing that links all of these is the bravado and nihilism in differing forms.

Fear appear at the close of Part I, and they are foul-mouthed and more. They certainly take the term ‘confrontational’ to another level, as they goad and entice violence from their audience. Their exposure in this documentary brought them to the attention of John Belushi, who insisted that they appear on Saturday Night Live. That brought them into a wider public consciousness. At one stage in their long career, Red Hot Chili Pepper, Flea, would join their ranks; and he offers some sanguine advice in the later instalments.

The sex-obsessed heavy metal movement. Poodle hair and poodle rock. The vacuous incumbency of this late-80’s scene is where the Venn diagram between part II and part I cross over, and the latter part is the slicker affair. Gaudier too, with an interviewee fixation on lucre and sex, and an absence of violence. All in all, it is something to laugh at rather than with, and it’s strange to report that the English contingent (Lemmy and Ozzy) offer the most thoughtful advice in a film littered with vacuity. You won’t be surprised that to learn that Kiss reveal themselves to be as insufferable as their reputation attests.

Part III returns to the hardcore punk sound that dominated the first film. It is immediately apparent that aside from the wanton violence, the area where it is different is in the enlightened views of the artists (less homophobia, for example). The coverage around the Hollywood home, with its innate and endemic debauchery, plays like a companion-piece to the old MTV show ‘The Real World’. By the time Part III came about, Spheeris seemed interested in some of the broader social issues on top of chronicling the music. The bands appeared to be more politicised, but the audience is once again presented as empty-headed, knuckle-dragging wasters. This does not prevent her making enquires about the domestic violence in the family home and so forth.

All in all, the documented individuals and artists were, more often than not, rebels without any real cause. Indulge in their ludicrousness and bathe in their dirty water. This is a phlegm-filled riot of angst, terror and noise. Some wouldn’t want it any other way. A kinetic experience that’s visceral and vital, and occasionally affected, just like the music it charts.

The Decline of Western Civilisation box set is available to buy from 31st August 2015. See the trailers for each part below.