This review will have more spoiler content than I’d normally allow, because the show is a dramatization of very recent events which made many headlines… so you might know the story inside The Dropout, the tale of Elizabeth Holmes and Theranos, the company she founded, grew to be worth of billions, and that collapsed so spectacularly that Holmes faces time in, and deserves time in, prison, for putting thousands of lives at risk.

How was that possible? By the end, Elizabeth Holmes is a cold, heartless conwoman, both in real life and in the show. But she didn’t start there and the Dropout is willing to portray her as slowly descending, in a completely believable and understandable way, into this fraud. So, Elizabeth starts off as a spoilt, entitled social outcast whose rich family propel her to a place at a good US college… which she promptly drops out of because she’s developed this messianic sense she is destined to become the next Steve Jobs or other tech billionaire. She’s looking round for an idea, and she comes up with one: the world needs better blood tests, defined as using less blood and trauma from the patient, so she uses her college fund and her absent sense of reality to build a business with a tech team and investment. 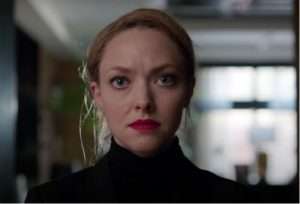 But here’s the thing. Holmes has no technical knowledge. She has no idea how to do this, and the people she’s hired do their best but they can’t do it either. So, running out of money and with no proof, she faces a choice: admit failure, or lie. She lies, and starts faking results, believing it’s just for the short term and in the end they’ll crack it. Throughout this, Amanda Seyfried just about keeps Holmes sympathetic, indeed someone you could probably get on with.

And then… The Dropout doesn’t have to portray Holmes as a weird Bond villain, because Holmes does that herself. She adopts a new voice, a dress uniform, she becomes an avatar of what she thinks billionaire success is like, and she moulds her company into such riches by being completely fraudulent about what she’s done. If we’re being harsh, it’s because there’s a clear point of change, one so clear the Dropout actually changes focus: for the first half we follow Elizabeth’s corruption, and for the second half of the season we mostly follow the people who bring her down. Because there’s nothing wrong with having a dream and raising funds, if you walk away when it fails. Elizabeth Holmes instead put her equipment into supermarkets, did tests on real people when she knew it was all a lie and didn’t work, and damaged people’s lives.

In the end she’s exposed, we won’t say how, that’s half the story. At the time of the show ending, and at us writing this, Holmes has been found guilty in a court and awaits sentencing. She doesn’t seem to really experience any guilt.

The Dropout does this story justice. The pacing is fast, the acting is universally good, everyone feels believable except Elizabeth when she’s in terminator mode (which is entirely real), you get genuinely swept along with the struggle to keep Theranos going, and when Holmes has fully turned heel it doesn’t expect you to still see as her as the focus. Admittedly, the source material is already great, but let’s face it they could have royally messed this us. Luckily, Seyfried gives a perfectly cast performance. If you already know the story, don’t worry, I did and I still was glued to the drama. If you don’t already know, prepare for something which seems almost impossible to believe.