‘The English Teacher’ – Out on DVD and Blu-Ray

It is interesting that for a film depicting the inner conflictions of a middle-aged school teacher and her pupils, there is as much disorientation in the final product as that experienced by the protagonists.

You see, The English Teacher is a candy coloured spectacle drenched in its own identity crisis.

Julianne Moore is the character of titular occupation. One day, she is revisited by a former student who has failed as a playwright in New York. She reads his unloved manuscript and becomes overwhelmed with a desire to use it as the project for the next school play. The dark subject matter is an issue for her superiors. A battle soon unfolds over how the ending should be presented. From there, disarray erupts when incidents boil over with considerable conflict.

Purported as a comedy, it presents a cocktail of inconsistent angle, tone and movement. Serious moments offering significant tragedy or weighty metaphor are frequently accompanied with comical music. It is a counterproductive application. 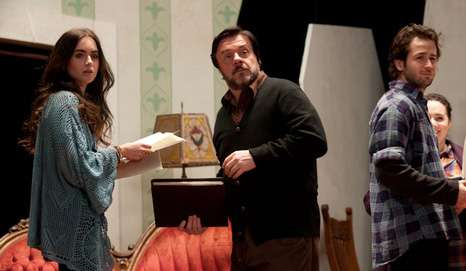 Ultimately, this film may lack a surefootedness. It may also be in possession of the sort of plot that you could map out even with all your senses cut off, but for the duration that it is onscreen, it is not without charm.

There are some intelligent references scattered throughout and its heart is clearly in the right place. With a stronger anchor to its own convictions, it could have been a cutting observational piece.

In this diluted format, it can be considered as enjoyable filler but, sadly, nothing more.

You can buy a copy of The English Teacher here.