The Rocket – Out in selected cinemas

A nomadic journey, which takes place across the scarred, scorched landscape of Laos offers a particularly intoxicating delight for filmgoers.

Warning: it contains not only an undertow of profundity, but a cheeky and effervescent James Brown lookalike in a purple suit (yes, really).

The Rocket tells the tale of Ahlo, a young boy ostracised as soon as he can splutter his first breath. Having survived the birth that his twin did not, cultural superstition marks him out as a bad omen and the bearer of misfortune.

Once his family loses their home, this maligned young lad leads his relatives onto an itinerant path. It is one that will force them to encounter both vicious hostility and fellow vagrant characters, some of whom offer kindred spirit (enter our purple-suited, James Brown-loving friend; the appropriately titled, ‘Purple’).

In order to prove that he is not bad luck, Ahlo builds himself a rocket and uses it to enter the most lucrative but dangerous competition of the year: the Rocket festival. 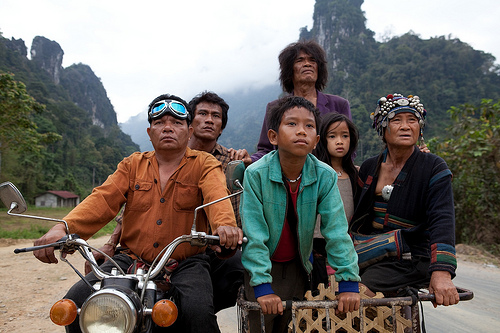 This is a story about displacement and division.  It is about hope and love. It is also about redemption.

For those itching for comparisons, there are echoes of Ben Zeitlin’s Beasts of the Southern Wild (2012). However, this film differs in the fact that it has less of a fantastical edge and is a little less in thrall with the romance of poverty.

Instead, it is a sun-kissed picture that masks its dark, rich metaphors in and amongst its portrayal of overtly real and self-evidential issues. It is a rocket that is armed and loaded with fresh performances, gentle humour and a hell of a lot of narrative meat on the bone.

We interviewed the director, Kim Mordaunt, where he spilled many interesting facts about the making of this film, the real life struggles for the actors and the shocking consequence of geopolitics. This interview can be found here.

The Rocket is in selected cinemas now.