The Who’s management team are the focus of new documentary, ‘Lambert and Stamp’

As we edge closer to the twilight years of rock music’s original progenitors – those establishment rattling, musical mavericks of the 60s – perhaps it is fine time that attention turned to an odd couple who sat behind one of UK rock’s most successful exports and noisiest bands.

For those unaware, The Who were propelled by a double act that you might be forgiven for thinking it to be the work of fiction. The aristocratic, cut glass-accented Kit Lambert and cockney rabble rouser Chris Stamp. Convening through shared film-based ambitions, they hatched an unusual plan; to get into filmmaking via the back door. This involved managing a rock group, make them as successful as possible and then jointly direct a film based on them. Paradoxically, things went both smoother than they expected and also a hell of a lot more complicated. 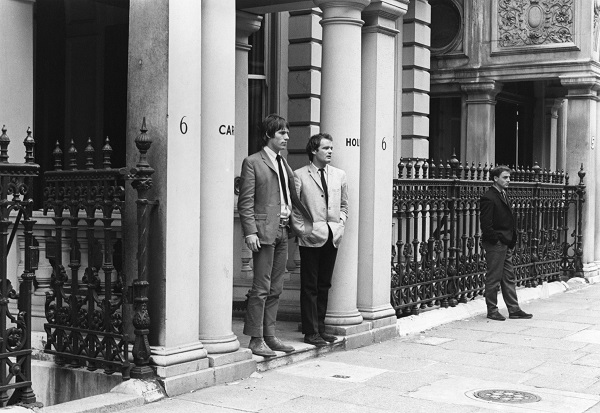 James D. Cooper’s documentary lifts the lid on this highly fruitful and auspicious partnership, but it is to be noted that testimony is shy of input from Kit Lambert; as he sadly passed away at the age of just 45 in 1981. Tragically, Chris Stamp has also passed since the making of this film. His twinkle-eyed recollections drive the content forward in a bewitching style. Also present are Chris Stamp’s brother, the film star, Terence, alongside Pete Townshend and Roger Daltrey, amongst others. Townshend proves to be a particularly lucid, candid and compelling witness to the events that unfolded from the inception of the group through the bitter fallouts.

This is a window into the wild early days and the acrimonious rows that drove a wedge between the band and the managers. Perhaps rather appropriately for the genre of music that they championed, Lambert & Stamp is a passionate and frequently chaotic documentary. Differing remembrances trip over one another in order to be heard, and often compete for the version of the truth. There is an argument that a more judicious editing process could have led to a more resolutely successful film, but there is charm amongst the indulgence. In fact, its bagginess evokes apt accord with the (occasionally) bloated excursions of the Who’s rock operas.

It is a feature that would make a good double-bill with Scorsese’s Bob Dylan doc, No Direction Home (2005), or maybe the film on Cream’s Ginger Baker, Beware of Mr Baker (2012). It could even work with The Last Impressario (2014) – a documentary on 1960’s West End’s theatre producer and socialite-with-clout, Michael White.

For anyone interested in the history of (rock) music and the giddy, heady days of yore in swinging London, this is vital viewing.