‘WILL IT NEVER END?!?!’ No, this isn’t the internal monologue of a man/woman sat in the dentist’s chair undergoing an extraction – although the same may well apply – but the internal scream of a committed viewer to the latest offering from Michael Bay in the Transformers franchise.

If you have ever been a detractor of Michael Bay’s efforts previously (there are many, although not as many as there are people to populate the cinemas and generously fill his bank balance), then you will find much to hate here.

One look at the financials supporting the saga shows the direction in which matters are heading. The budget history offers thus:

Oh dear. Yes, we are facing the costliest production yet. How does it pay off? Has the money been spent on tightening the script, working out the logistics and ironing out any dire dialogue? Well, no. The call appears to have been made to the special effects team, and Bay has gone ‘all in’. Spectacle is in abundance.

The feel is as luxuriously expensive as a browse through the priciest departments of Harrods. The camera palette is crisp, sharp, warm. There is a hazy glow. There is even a moment where Mark Wahlberg’s Cade stands on the porch and there is an evocation of the rich skies and camera positioning that accompanied Scarlett O’Hara’s famous proclamation at end of the first half of Gone With The Wind. Why? We have no idea.

There is plenty to delight the eyes, but this is ultimately a hollow shell; empty as a tube of Smarties guzzled by a thieving sibling and then handed back to you with a denial that anything’s missing. There is no depth here. Who else could helm such a vapid and vacuous work than Michael ‘Shallow’ Bay? 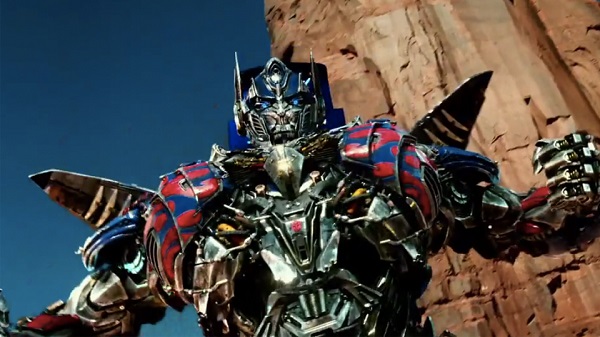 It is hard not to pity Mark Wahlberg. He has to try and keep a straight face whilst delivering lines that are clunkier than a decrepit Decepticon. Even George Lucas would have said, ‘hold on a minute. Let’s work on this’.

T.J. Miller, as Cade’s friend, Lucas, is seemingly channelling his best Jason Lee impression. Close your eyes and there is no difference. You see, here’s the rub; there is no personality in this film. Age of Extinction talks a lot about ‘soul’, yet it has none. It is doubtful that anyone involved sees the irony in this.

In terms of internal logic, one can’t fail to emerge post-screening thinking, if Optimus Prime can blast himself around through an internal rocket, why the hell does he bother driving? Yep, that’s what you’re dealing with. The only extinction under plausible threat here is of the rapidly dying brain cells at watching this tripe. Yes, it is stylish. Bay would be great at directing music promos. As for film, not so much. And this is his worst Transformers feature yet.

Transformers: Revenge of the Fallen has been usurped as the nadir of the series. Depressingly, another sequel has been announced, likely to reach us in 2016.