What’s next for the struggling Great British Bake Off? by Hassaan Mohammad

The Great British Bake Off is one of Britain’s most beloved television shows. Starting out on BBC Two in 2010, it migrated to BBC One in 2014 and then to Channel 4 in 2017.
Bake Off has become synonymous with many elements – the positive camaraderie amongst the participants is a big one. Bake Off makes a conscious effort to cast a wide range of people. There are format beats viewers now recognise (and expect) such as the ‘Hollywood Handshake’, when judge Paul Hollywood offers up a handshake to a baker he is particularly impressed by – this is considered one of the biggest accolades on the show.

There’s a quirkiness that befalls Bake Off, as well as its approach to humour. Bake Off has become known for its innuendos. It all began with the use of the term ‘soggy bottom’, which is the result of something being undercooked.

Bake off encouraged a move towards more positive television, with The Voice UK also breaking through around the same time. It’s a stark contrast to the confrontational television of the mid 2000s (Big Brother, The X Factor) and more dramatically presented cookery shows (MasterChef, Hell’s Kitchen). Bake Off’s roots are home baking. In its infancy, the challenges were relatively basic. Although in recent series the technical challenges have seen contestants unaware of what they’re being asked to make, the very first one was simply a Victoria sponge and the third one was a loaf of bread.

In recent years, Bake Off has branched out from baking and has featured cooking elements. The final of the 2018 series saw the three finalists cooking pitta breads on an open campfire. The 2022 series featured a Mexican week with a technical challenge featuring tacos. This episode received a lot of criticism for an offensive and tacky portrayal of Mexican culture. 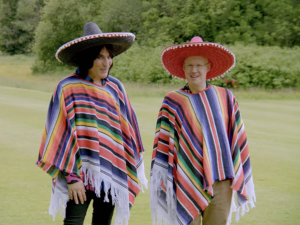 These elements, for me, act as an abandonment of the show’s baking-first premise. I feel themed weeks could be approached in a much better way that still involves baking. I often wonder if the team behind Bake Off may be looking at fancy cake decorators on social media as something for the show to ape, as a means of evolving the show, when it rather instead has the impact of alienating its core fanbase.

The Great British Bake Off has become an institution of sorts, not just in the UK but around the world. Less is more and I see no reason why the show can’t run and run.