It’s fair to say that The Chase is one of the most recognisable television brands in the UK full-stop, never mind in the quiz genre.

It has been on air for nearly 13 years and sustained its popularity over that time, which is very unusual given the shifts in television viewing habits. It has also made stars of the personnel on it too.

3 million people tune in religiously every day at 5pm, not to mention its various spin-offs on the weekends and later on in the evening. But what are the ingredients that make The Chase the success that it is?

For a start, it has the fundamental ingredients needed for a strong television quiz show; the ability to play along. The show is formatted in a way that allows for viewers of all ages and “levels” to have a real go at the show.

As viewers, we become quite invested in the show’s players. From their backgrounds to their ability to answer questions and the money they put into the total prize fund. There are visions of a whole pub erupting in joy when a single contestant manages to beat The Chaser

For a quiz show to cut through, there needs to be a substantial entertainment value and The Chase has that in abundance. The host, Bradley Walsh, frequently cracks up at comedically-worded questions, not to mention the odd answer given by contestants. This is undoubtedly a deliberate approach by the question writers who are aware of how it makes good television, especially since the infamous ‘Fanny Chmelar’ moment in 2011.

The attempts to generate comedy value may well be orchestrated but hit with the audience. They will often place contestants with peculiar names in a certain order. For example… 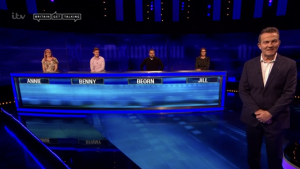 The Chase has spun off into various versions. We have Celebrity Chase, The Family Chase, and Beat the Chasers. The latter works as a format in its own right, but I am less sold on the former two. Family Chase, as you can guess, featured teams of families competing. Unfortunately, any jeopardy was lost as those who were eliminated were likely to still win *something*.

Meanwhile, Celebrity Chase is a tale of two halves. On the one hand, the studio audience gives the format the atmosphere the daytime version often lacks, plus is much more ideal than canned applause used there. Bradley Walsh bouncing off the celebrities gives it some good moments – they had Basil Brush of all people (well, mammals) on one edition. On the other hand, you could make the argument that the Chasers are almost robbing charities of money. Not intentional as that is merely the format of the show, but that is more or less the case.

I would rate The Chase an 8 out of 10. It’s default viewing in my home and a quiz I will never tire of.