Described as ‘Chamber Folk’, this was my first encounter with Darlingside on day 2 of Black Deer Festival 2022.

It’s sadly not as sunny as yesterday’s scorcher but the huge crowd are undeterred as four musicians move onto the stage to sound check. As a secret folk-fan, my interest has now been peaked by the few lines of fiddle weaving its way from the stage.

Hailing from Boston, Massachusetts, the comp introduces the band as having ‘intelligence, charm, music and heart,’ and from the first four bars of gentle finger-picked guitar I know that I’m in love. If you too are unfamiliar with Darlingside, think Bear’s Den meets Simon and Garfunkel, with equal soul but double the harmonies. One kick drum sets the beat of their first song ‘God of Loss’, and we see the true impact that this balance of vocals and instruments can have. It comes to a heady climax, led by the skilled fiddle player and we’re lost in the music with them. 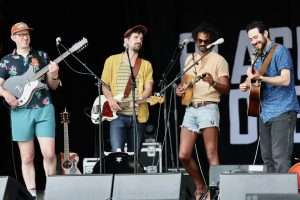 One of the musicians echos a key sentiment of all who have attended this weekend; ‘We’ve been waiting years to be here, with real raindrops and real sweat. We feel so fortunate to be here with real human beings.’

They move seamlessly into ‘Go Back’ and four vocals draw us into what we mistakenly believe will be a quiet, gentle number – but we’re quickly foot stomping to the banjo and revelling in the clarity of each musicians’ voice. Their control of tempo is phenomenal and their music is clearly as easy to each of them as breathing.

Darlingside released a new album at the beginning of the pandemic called ‘Fish Pond Fish’, a challenge for all of them as they had to record each part individually and from their close proximity on stage it is clear to us that they feel uncomfortable with distance. With a wide smile, Harris Paseltiner turns to the audience and says, ‘I’d forgotten the art of live music… and how powerful it is to hear people make noise’ and we can see that this set is as important to them as it now is to us. 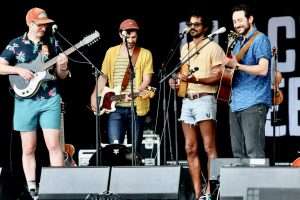 A swift introduction to each of the band members leaves us feeling like we know them a little more: Dave, on kick drum, bass and guitar, now into plants and able to use the word ‘seedling’ in the correct context, Harris, on cello and guitar who forgot his belt (so we may get to know him on an even more personal level), Don, on banjo and guitar who has been experimenting with wide toe box shoes to allow his feet more freedom, and Auyon – who has also been experimenting with wide toe box shoes, alongside some alarmingly short denim hot-pants.

Not only are we absorbed in the characters of this band, once again we’re pulled into two different sets of vocal duos that firmly display the prowess this band commands over their vocals and harmonies, particularly with the instruments stripped back to a single guitar.

With lyrics such as, ‘and I tried to get back to the heart again,’ I can confirm they have reached their destination in ours. Come again Darlingside, you are very much welcome here in England. 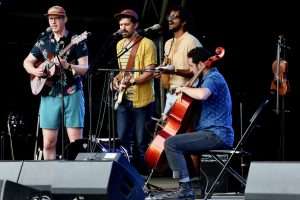