Glastonbury 2022, That’s a Wrap: The Talking Points on the Year the Festival Bounced Back by Greg Whetherall

Glastonbury, it was great to be back. After civilisation was battered over the last couple of years thanks to COVID-19, it was nice to sample a slice of our ‘old’ world again. The delayed 50th anniversary getting its rocks off finally, and the first big Glastonbury get together/reunion/party/call-it-what-you-will since 2019. People were ready: bucket hats, flags, flamboyant clothes and all. Like zoo animals let out of their enclosures, all bets were off. Music washed over the unwashed and debauchery ensued. It was wonderful.

With this in mind, here is the SupaJam Glasto 2022 verdict:

Yes, Kendrick Lamar may have brought his A-game and game-changing rap to round out the festival. And he may have done so with the most theatrical, intellectual set of the weekend, positively rocking the sh*t out of it and concluding with the most mesmerising political statement of the whole festival. But he still didn’t claim top spot. Likewise, pop superstar Billie Eilish may have sung “You should see me in a crown” halfway through her set before cementing her coronation on the Friday night (becoming the youngest person ever to headline the main stage in the process). It wasn’t her either.

Even in this estimable company, an 80-year-old Sir Paul McCartney took flight like the proverbial ‘Blackbird’ he crooned from a raised stage block and soared above the other headliners. This was a spellbinding drive through the long and winding road of an imperious songbook that not only expanded pop’s vocabulary but wrote the rules for nearly every artist that has followed. The final hour and fifteen minutes were possibly the most heartrending, emotional, joyful, and transcendental in the legendary festival’s history. No superlative could do it justice.

We know that this one has been around for a while, but its proliferation seems to be growing and it’s taking the edge off the “live” experience. Over the course of the weekend, several of the heavy-hitting main stage stars adopted the help of – eeek! – pre-recorded vocals at certain points in their set: Wolf Alice, Diana Ross and even Billie Eilish, please stand up. You were each guilty of occasionally leaning on it to bolster your sound or give you a little leg up. Please stop. If you can’t reach the old key, do what Liam Gallagher does and shift everything to the key of B, or whatever suits your range. Also, we’d rather hear imperfection – like Macca’s faltering lower range – than have our experience diluted by witnessing the sort of a faux-live, choreographed Top of the Pops routine from the mid-90s. 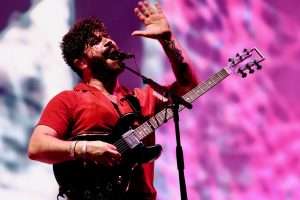 Political Drum Everyone Was Banging: Outrage over The Supreme Court’s Overturning of Roe v Wade

We looked on as the cult-like Jeremy Corbyn phenomenon reached fever pitch in 2017, as the then-Labour leader made a play for the ‘yoof’ vote on the Glastonbury main stage. At the time, he could do no wrong, and the whole site was at the mercy of involuntary repurposed Seven Nation Army riff chanting his very name. And, in 2019, David “National Treasure” Attenborough stood before a gargantuan crowd to promote better treatment of the planet (and to plug his upcoming series).

This year, the political issue that dominated the weekend was what had unfolded across the Atlantic. While the horrifying actions of the Kremlin in Russia’s war in Ukraine may be a terror that is leaving the wider world in abject dismay – and President Zelensky had a pre-recorded message to greet festival goers – it was the overturning of the law that has provided constitutional protection to women for the right to abortion that elicited the most protest. 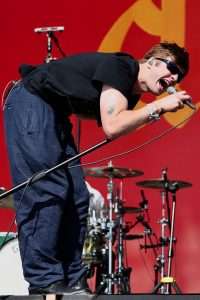 Lily Allen joined Olivia Rodrigo for none-more-perfect ‘Fuck You’ pointed at US Supreme Court judges, Kendrick Lamar (literally) mic-dropped to a “They judge you/They judge Christ/Godspeed women’s rights” rap, and Billie Eilish dedicated the melodic protest of ‘Your Power’ to this “really, really dark day in the US”. Nearly every artist had some sort of comment to make, each despairing at the Free World’s mammoth backwards human rights step.

Most Infuriating Element of the Festival: The. Sheer. Number. Of. People.

Glastonbury is all about the vibes, but the interminable, endless queuing for food, beer and toilets, as well as the incessant jostling for space were an unwelcome reminder of what being back in the thick of humanity really constitutes. It’s unavoidable when it’s a festival on the enormous scale of 210,000 revellers but it didn’t make it any easier an adjustment. Even the phone networks couldn’t handle it. But, hey, it’s the price you pay (along with overpriced food/drink, a hefty entrance ticket and travel costs, of course) for one of the most memorable weekends of your life. Deal with it. 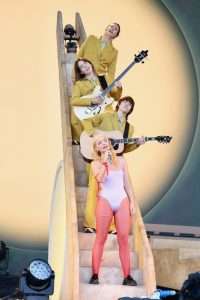 Sam Fender pushes this one close, but he already bagged a penultimate place in the main stage running order on the Friday. Therefore, this one goes to Olivia Rodrigo. After all, anyone who bore witness to her performance on The Other Stage could see that she has already entranced the next generation, a legion of fans in thrall to her tales of heartache, heartbreak, and self-doubt passed through a pop-punk filter. Rodrigo’s domination on planet pop seems to just be starting. Ariana Grande, Taylor Swift, Billie Eilish et al might need to start looking over their shoulders… 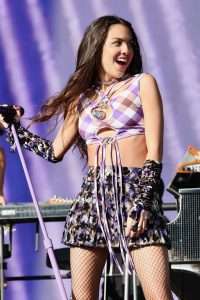