Kasabian take the gong for being the first proper all-out rock band of the London leg of the 2014 iTunes festival (Beckalmost counts). They celebrate this fact by playing two sets at the Camden Roundhouse – effectively making them their own support band – including an entire playthrough of their eponymous debut album.

‘Club Foot’ is probably one of the most dominating ways you can kick off a gig or an album, but on a completely cold crowd it doesn’t get the rumbunctuous reception a track so gargantuan deserves. But it has a rumble of authority that tees up the night. The first notable movement since them comes with the FIFA Rock of ‘L.S.F.’. The uplifting keys and reverbed vocals causes the blokes in the crowd to make themselves known by doing that dancing-but-not-dancing arms in the air sway. 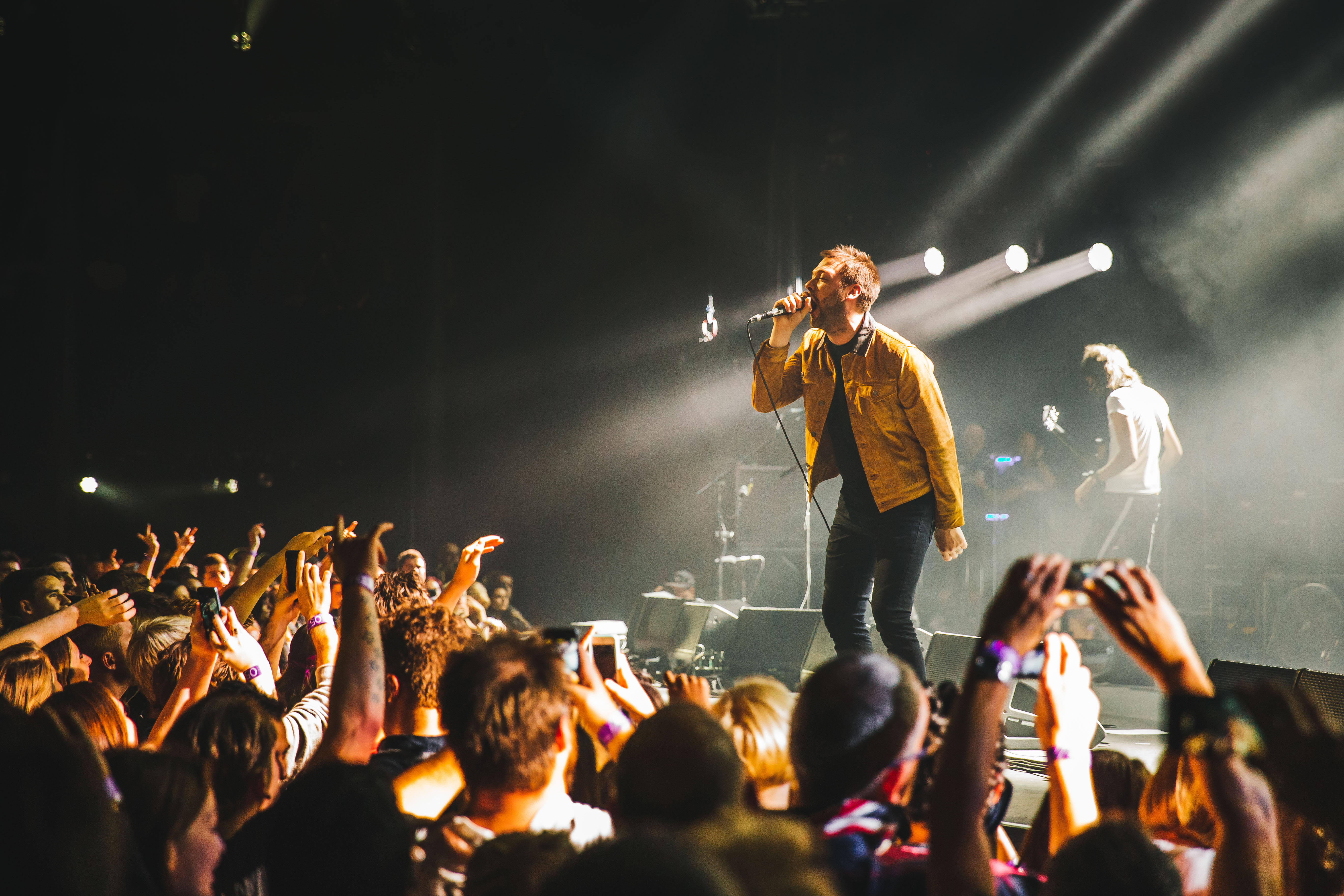 Many of the tracks from this album haven’t been played live in over five years, some not since 2005. A highlight is the shimmering ‘Test Transmission’, jazzed out while the room is bathed in red. The buzz in ‘Butcher Blues’ hint at how their stadium-esque sound would later develop, while also giving plenty of nods to Primal Scream and Stone Roses.

A giant clock counts down the 15 minute interval between sets, and the second is started with the massive throb of ‘bumblebee’ that gets frantic fist pumps for the first chours. The tribal power is driven home as ‘Shoot The Runner’ announces itself with drums that sound like Fat Les marching through the middle of a street flanked by red-brick terraced houses. There’s horns too. They really hit their stride when ‘Underdog’ finally gets the crowd as uninhibited as they deserve, which never tires throughout the remaining 45 minutes.

It’s interesting to compare to the first set. You wouldn’t necessarily say the songs are better, but they’ve definitely unlocked an elusive sound that’s meticulously chiseled to fill giant rooms of people. This boldness and grandeur, combined with a string quartet in skeleton outfits, suggest that the band are ready to go full Spinal Tap in an album or two. But that’s fine, nobody ever made a film about David Gray.

On record, 48:13’s lead single ‘eez-eh’ was one of the worst releases of 2014, it sounds like a Super Hans b-side that he’s now slightly embarrassed about. The cringey attempt at social commentary in the lyrics sound like something a 15 year-old would write a week after discovering Rage Agaisnt The Machine and signing their first online petition. But it’s a track that was made to be played live, where its Dance/Electro energy can shine brighter even though you’d be forgiven for thinking of the many acts who play that style more regularly and do it far better.

The countdown is used numerous times later on through the set, it creates a pavlovian response that specifies exactly when the audience is supposed to go buck-wild. You could argue that it’s cheap, and that a band should be able to get that response without having to specifically denote the precise moment when the crowd are allowed to rock the hell out. But it works and it’s fun, as Sergio points out “this isn’t for the chin-strokers”. Go along with it and you’ll have a better time than if you don’t.

The main set closes with Veliciraptor!’s ‘Goodbye Kiss’, a disarmingly honest ballad to cool down before the encore. ‘Fire’ closes and is continuously sung out into the streets long after the band have departed from the stage for a foot rub and some orange slices (presumably). Depending on how much you get them, Kasabian can veer between being an awfully likeable band and feeling like the biggest pricks in the pub. They swagger around as if they invented Britpop, but the warmth between them is showed with subtle pats on the bum bum and the odd peck on the cheek, reminding you that they’re just a bunch of mates who went for it. They have a reputation for being the biggest Lad Band in Britain by default since Oasis split, but there are worse labels to have and it’s a perfectly legitimate role that someone has to fill. And if nobody is stepping up to take their spot, why should they step down?

The iTunes Festival continues throughout the month of September. Keep posted to SupaJam for all the reviews and news on this musical feast.