I hope y’all brought your stomping boots! Because Noble Jacks are here, kicking up a storm!

Noble Jacks – a band local to the festival from Tunbridge Wells – bring to Black Deer the Country and Americana vibe we’ve all been looking for. Their balance of drums, base, guitars, fiddle and the occasional harmonica get the blood racing, and there’s a rawness to the tone of the lead guitar that thrums in our veins.

The skills of lead singer Will Page entwines traditional folk with raw country-rock drums and we have no choice but to stamp our feet in response to their song, ‘Downhill’; I’m looking for a partner to ‘do-si-do’ as couples link arms and spin around me. 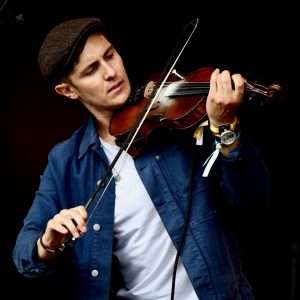 This band are the perfect set for shaking away any festival fatigue, particularly after last night’s dramatic exit following a storm warning! Suddenly I’m in the mood to drink in a crowded and lively Irish bar, but I will happily take this alternative on an energetic Sunday afternoon at the end of what has once again been a truly wonderful festival. In the words of Page, ‘It’s drink time – cheers!’

As if in response, the sun makes a sudden appearance and both the band and audience do cheer. With carefully crafted lines of melody weaving between the guitars and fiddle, it’s easy for everyone to feel unified. 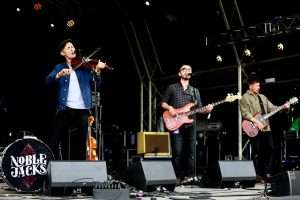 After a shout out to Paul Dunton, ‘The Man of Tunbridge Wells’, Noble Jacks launch into a rousing rendition of ‘Rambler’s Steam’, and I overhear a man ask his friend, ‘Why aren’t these guys headlining?’ I would be inclined to agree as I party along with the everybody else, hooked into every song: so different from the one that preceded it, but each brilliant.

‘If you’re still sitting down and have been debating getting up, now’s your chance!’ is the vocal introduction to ‘Rely On Love’.

This song is full of audience participation on the lines ‘I said’, ‘She said’, and finishes with a wave of people following the instructions of the band to ‘get down’ – before leaping into the air, fist pumping and dancing to the final chorus. We’re singing and dancing right up until ‘The Blacksmith Stomp’, one of their most popular numbers and the final song for this fantastic act. You can tell that these local boys love what they do – and so do we!

Check out their brand new album, ‘Last of the Wild’, released earlier this year. 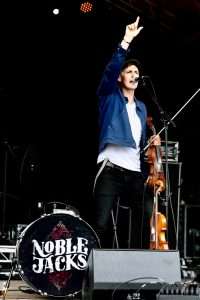