DISCLAIMER: I’M NOT GOING TO BE DISCUSSING THE TORRENTIAL DOWNPOUR OF RAIN IN THIS REVIEW.

The Walled Garden of Eden?

One of the great evolutions of Green Man this year has been the refined, shrew curatorial work on the Far Out Stage. As I said in my review of Friday, with its cast of groups you’re more likely to find in our grimiest venues, it is a stage with the skill to transport you from a huge tent into an intimate setting. This has become the Far Out Stage’s unique identity. An identity refined enough to stand tall next to the Mountain Stage’s long-established distinction. Now, the next area for the folks over at Green Man to focus on is the third stage in-line: The Walled Garden.

One of their greatest challenges is transforming the Walled Garden: an idyllic historic setting, surrounded by the tall stone walls of the Glandusk Estate into a space with the same artistic character and integrity. Lit obscurely, often in fluorescent ambient lighting, this space has you looking over your shoulder, questioning your psyche. It is the perfect vehicle for avant-garde subtlety and expression, which is a quality that hasn’t yet been wholly harnessed. However, on Sunday at Green Man 2015, there was a balance and depth on show that was befitting of its beauty.

After being serenaded by the brooding surprise Meilyr Jones in the Walled Garden, we’re later plunged into cyclical obscurity and ultimately off-kilter qualities of the impressive Boxed-In, who have an open-dialogue with a crowd who are hemorrhaging inhibitions. The show follows an unusual trajectory of intermittent joy and obscured loneliness. is fittingly symptomatic of the condition of their namesake. All We Are have raw physicality in abundance. It is a quality that you could argue is lacking throughout the day, but there has to be variation: a sense of progression as we’re plunged into darkness, and here we have it. The curator’s stone foundation is simply to be the off-kilter: this isn’t a space like the Mountain Stage or the Far Our in which people have an expectation of atmosphere, but they’re rather subscribing their intrigue to the unknown and unusual.

A stage will ultimately be defined by their headliner and to for the Walled Garden to become the left field sanctuary it shows the promise of being, it is a must. In Owen Pallett, they’ve a headliner to rival any worldwide. Whilst this is a man responsible for one of the defining albums of 2015, In Conflict, we must remember that Pallett is the reason that strings so often have a place in contemporary indie music. Arranging on seminal records such as Arcade Fire’s Funeral, Neon Bible and The Suburbs, Beirut’s The Flying Cup Club, Grizzly Bear’s Yellow House, Caribou’s Our Love and Fucked Up’s Hidden Love, he is an artist who has had arguably the biggest influence on the complexion of Alternative Music today.

Here, pitted gruellingly against GOAT and St Vincent, he has an intensity and sincerity like no other. His pieces like ‘Sky Behind A Flag’ and ‘In Conflict’ – obscure, intertwined and entrancing – shake and bend the very fabric of the walls they’re surrounded by. Crowned by ‘Throw Your Arms Around Me’, Pallett’s gut-wrenching tales of despair are rivalled by none other. Mystifying, challeging, complex and etherally brilliant: Owen Pallett is the absolute embodiment of what the Walled Garden’s tone should be.

Theatrical, arresting and sculpted, The Mountain Stage has the potential to create some of the most intense moments you’re likely to see at any festival. Equally some can succumb to its openness and the space that between artist and audience seems to grow song-by-song. If Saturday paid homage to local heroes, Green Man’s final day is D-Day and an unrivalled crop of talent make their way across the Atlantic, arriving at the Mountain Stage in their droves. One-by-one, they showcase the art of not shrinking in the shadow of the stage. However, with the scope of characters and creative output on show, each talent manages to deal with the issue in their very own idiosyncratic way.

Perhaps the most I was worried about was The Antlers. After seeing the Brooklyn trio bring their 2014 record Familiars to a dark and diminuitive Birmingham venue six months ago, it was difficult to imagine the group thriving in a space so detached from where I’d seen them enthral. However, poised in the valley before the bank, I let the immersive waves of ‘Palace’ wash over me. The group are perhaps the most surprising of the weekend, caressing and manipulating sentiments slow and purposefully throughout the trajectory of their set. Peter Silberman’s vocals hang wonderfully and he possesses an almost-harrowing purity: hearing somewhat discomforting sentiments sang at ease gives the whole performance an almost ethereal quality.

The opening three chords of ‘Bored in the USA’ sound and the crowd roars.

“Only here, at Green Man Festival, would this song be greeted by cheers like that. I’ve found my people.” Father John Misty says with a look of near-confusion, and is met with more cheers, “now shut up!” 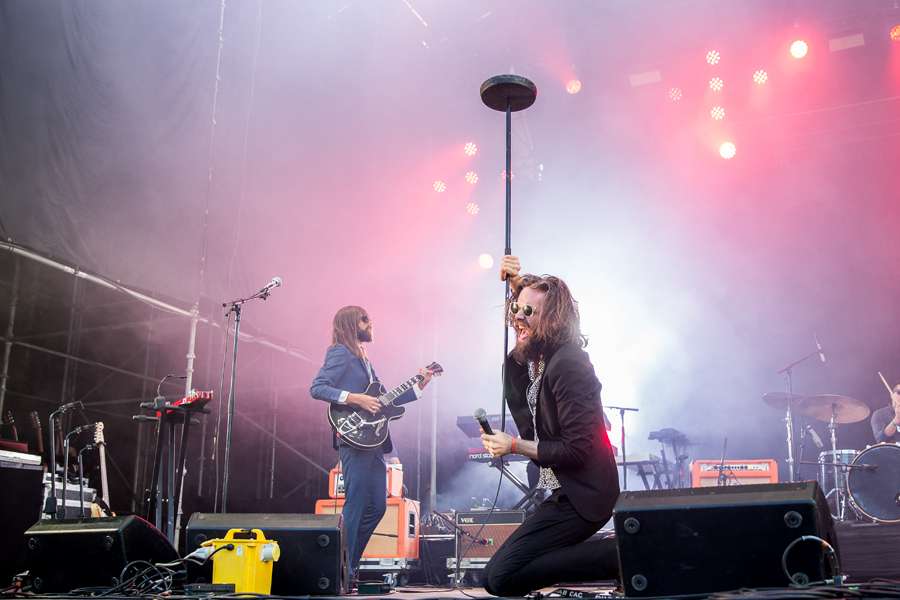 And whether it is pulling an “LSD-laced” hair of an audience member from his throat, engaging in a brief Q and A with heckling crowd members and thusly explaining both how “demoralising” removing his shirt would be and how his favourite colour is a “deep, capitalist green”, Josh Tillman does possess a unique connection with his audiences. While it is his unrivalled honesty and genuine suffering he illustrates on both record and stage that has manifested these idiosyncratic, personal relationships with his crowds around the world, it is the audience that Green Man has established that has brought Father John Misty into contact with “his people”. The festival’s culture of employing brilliant, diverse artists of a certain type over the past decade has been responsiblte for creating a culture of trust with their audience has made for this quality of people and musician alike. However, watching Father John Misty perform with his unique brand of immediacy and flamboyancy, matched in the brilliance of his songwriting, it’s difficult to imagine an environment in which he doesn’t steal the show.

St Vincent’s journey followed the trajectory of the festival itself. She has grown from a discernible shadow in the background of art-folk Sufjan Stevens’ touring band into a remarkable figure. And, like Green Man 2015, her purplexing self-titled record is her most purplexingly brilliant. This set is the crown in the jewel of both parties’ intense years of work and eventual breakthrough, and it is the perfect depiction of why their rise shows no sign of stopping. Clark, shuffling back-and-forth in her unique, robotic manner flies through the inversely ill-disciplined off-kilter disco hits, ‘Digital Witness’ and ‘Birth in Reverse’. Plunged into the deepest of darknesses, it feels a far cry from where St Vincent will have become accustomed to playing and there are concerns of detachment, however it is when she assumes the structure on the stage that she gets to address her own connection with the crowd, the concept of the underdog. She tells tales of the audience’s deeply personal upbringing: being aroused by Edward Scissorhands, ordering “steak bakes” from Greggs and eventually growing old, arriving at Green Man Festival. Clark flies the flag for the awkward, the uncomfortable and out-of-favour giving them a song befitting of their plight in the seminal ‘Cheerleader’. It is a piece that not only sounds as a siren for the crowd, but could become an anthem for the festival itself.

For this, my fourth time at the festival, I’ve learned to appreciate how poignant the pagan-esque tradition of burning the somewhat innocent-looking Green Man is. It has progressed from being something finite to rather representing yet another chapter added to one of UK alternative music’s brightest lights. It is too rewarding, educational and galvanising to not warrant your return.