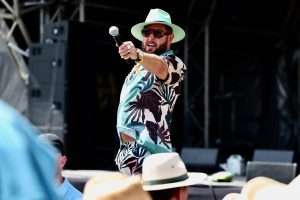 The rest of the Cuban Brothers, clad in bright green suits to match Miguel’s green, flowery shirt, support the act with backing vocals and intermittent break dancing, as if this man needs any more stage presence beyond rapping about his ‘ex-girlfriend Davina McCall’.

‘This one’s for the ladies…boys, girls, Cubans or crazies…’; the beats and vibes are strong and by song 3 no-one is too shy to dance and sing along. Especially when we’re asked to sing Happy Birthday to Kim in the crowd (50, happy birthday Kim!) before Miguel invites himself back to her tent later this evening. 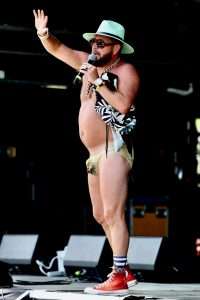 By this time, we’re starting to wonder if this act is more stand up than music until the Cuban Brothers launch into ‘So Sweet’, and we’re clapping along to electronic Cuban once again.

‘I Hate Hate’ and ‘Mike for President’ quickly follow, demonstrating further Miguel’s rapping skills, before Kenny the Bastard is introduced for his dance along to Whitney Houston’s ‘I want to Dance With Somebody’ (post Bobby Brown, who apparently has a knee in the nuts coming from XXXX).

This is where the strip show really vamps up, revealing Kenny’s skin-tight, fringed body suit that leaves nothing to the imagination – or so we think, until Miguel removes all of his clothes apart from a lurid yellow thong, dry humps a man at the barrier and climbs into the crowd. His return to stage sees the mic placed in his butt crack, and we’re only slightly reassured when he gives it a wipe before the final song: a mash up of ‘I’m Coming Up’, ‘These Are The Good Times’, and ‘Never Too Much’ by Luther Van Dross.

A fabulous routine of comedy, beats, outrageous dance moves and more skin that we were expecting at 2 oclock on a Friday afternoon leaves us lusting for more a Miguel and his entourage dance their way off the stage. 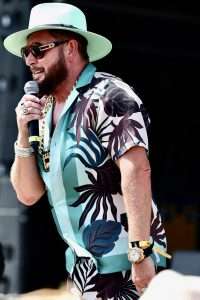