Yes, you read that right – The Red Hot Chili Peppers were supported by both Thundercat and Anderson .Paak and it was just as good as you’d imagine. Frankly, you’d be hard-pressed to find a trio of acts more musically gifted.

Opening proceedings, Thundercat came on stage wearing a Sonic The Hedgehog necklace and immediately descended into a furious flurry of bass notes. Being arguably the best bassist in the industry right now, it was a sight to behold. Whilst incredibly impressive and technically flawless, his frantic and seemingly improvised jams sometimes didn’t land, whereas fan-favourites such as ‘Them Changes’ and ‘Dragonball Durag’, characterised by their gloopy bass riffs went down very well. 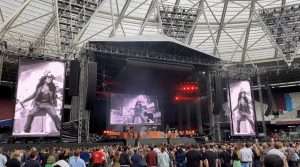 Introduced as LA’s greatest export by Thundercat, Anderson Paak then strutted onto stage in his Silk Sonic inspired 80s get-up and absolutely killed it from start to finish. Oozing talent, he transitioned from singing, dancing and playing the drums. Truly a masterclass in improvisational funk, Paak remembered lyrically complex songs like ‘Lockdown’ whilst seamlessly throwing in fills, breaks and accents into his drumming which even Moon and Bonham would be proud of. Most importantly though, his set was a lot of fun and you could tell he was enjoying every second. Dancing around the stage to ‘Am I Wrong’, which opens with the fitting lyrics “I’m only comin’ out to play”, it was hard to not share in his infectious happiness. Doing a near-full set, we were pleased to see he performed favourites like ‘Tints’ and ‘Come Down’ too which only amped the crowd up further ready for the long-awaited main event.

Opening with ‘Can’t Stop’ felt poetic given the band are entering their fourth decade and are still playing with as much youth, energy and vigour as they did when they first began. It’s a further testament to the band that at many times throughout their set it felt like frontman Anthony Kiedis was the backup singer for the crowd as they belted the beloved songs out. This is largely due to the fact their set spanned multiple albums, rather than focussing on their most recent one, Unlimited Love, which was nothing to write home about. Familiar songs like ‘Dani California’ and ‘Snow (Hey Oh)’ were very welcome and they were all the more special for John Frusciante playing them after his recent reunion with the band after more than a decade apart. Watching them on stage, it was clear the band still has incredible chemistry – something it felt like they’d lost in recent years. Time flies when you’re having fun, and the evening soon came to a close with an encore of ‘Under The Bridge’ and ‘By The Way’ leaving everyone on a high. 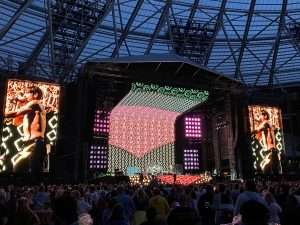 Now we’ve had some time to reflect, we’re surprised to say that Anderson .Paak well and truly stole the show. This isn’t to the detriment of the Chili Peppers, but rather to what an incredible showman Paak is. We doubt we’ll see a lineup that good outside of a festival again, but one thing’s for sure – we have ‘Unlimited Love’ for all of them (sorry, we couldn’t resist…).