In some ways, it’s easy to take Wolf Alice for granted. Having been a fixture on the alt-rock landscape for over a decade, their climb to the British music’s top table has been more of a purposeful walk than a sprint. Although not to say that it hasn’t been without the poise and tidy execution of a high pedigree contender, it’s just that they have been slowly building a rich catalogue that caters for all seasons. It’s become a diverse place, and last year’s excellent, and rightly celebrated, Blue Weekend album is a testament to that.

Make no mistake, however, the main stage at Glastonbury is a big moment for the Londoners. Frontwoman Ellie Rowsell may be dressed for the occasion – a flowing silver dress adorned by lengthy tassels dangle around her – yet the faraway look in her eyes offers the impression of someone who’d rather be attending to some pressing life admin at home instead. Nevertheless, her band are the opposite, imbuing the eagerness of a puppy playing fetch. They look positively thrilled.

They kick things off with a bang. ‘Smile’, complete with its delicious and intricate wordplay, gives way to the frenetic guitar workout of early single ‘You’re a Germ’. Following a blistering opening salvo, the band take the heat off the pot and delve into the more expansive sounds in their canon. Backed by a string section, Wolf Alice prove why they are such a tantalising prospect right now. Although there’s the nagging feeling that the backing vocals might be a backing track, the set unfurls with highlight after highlight. ‘Safe From Heartbreak (If You Never Fall in Love)’ glimmers, and ‘How Can I Make It OK?’ shines. 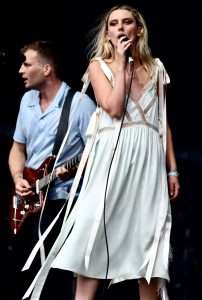 As matters turn towards the end, things get tastier. Debut LP cut and long-time live favourite ‘Giant Peach’ is a riot: a cavalcade of coruscating riffs and thunderous drums. After all, when Wolf Alice rock, they rock with the best of them – albeit in more of an art school fashion than that of their grunge heroes. That matters little, as the jewel in the Wolf Alice crown is their adaptability. A spellbinding ‘Last Man on Earth’ is a beautiful moment. Rowsell takes the opportunity to sit casually at the lip of the stage. At the conclusion, she looks out, and that faraway stare that’s haunted the whole set cracks. She is visibly emotional. The crowd cheer heartily. Guitarist Joff Odie puts his arm around her. She lets out a huge, irrepressible grin. ‘We didn’t think we’d make it here today. We’re a bit emotional. This is so surreal’, she offers.

‘Don’t Delete the Kisses’ rounds off a set that was lay a line in the sand. Wolf Alice are ready for the big league. More than that, they’re here to stay. The music scene is all the better for their presence.