The Elden Ring player so good, the devs sent them a sword

You know how in Britain, if you do a lot of good charity work helping other people, the Queen gives you a medal? Turned out there was a way to do that in Elden Ring.

Now, obviously there’s absolutely nothing in the code for that. But after Klein Tsuboi finished his playthrough of the most critically acclaimed game of the year, he found himself with a mission. Elden Ring is hard, and one boss battle above all is absolutely frustration on legs. The thing is, Elden Ring has an option where you can tag in another human player on the web from across the world, so Klein, who was very, very good at beating this enemy, created the persona of ‘Let Me Solo Her’, and would turn up with nothing but pants, a pot on his head, and all the skill in the world. Victory soon followed. 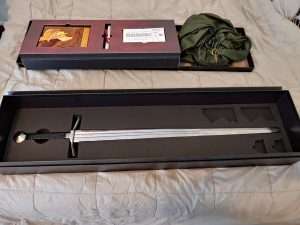 Let Me Solo Her became such a legend for helping people out, that the dev team noticed him… and the dev team have now sent him an actual fucking sword to thank him for being the true Elden Lord, which is equally legendary behaviour.